Tuesday, August 9
You are at:Home»News»Sarawak»Enjoy your midin without fear — Professor 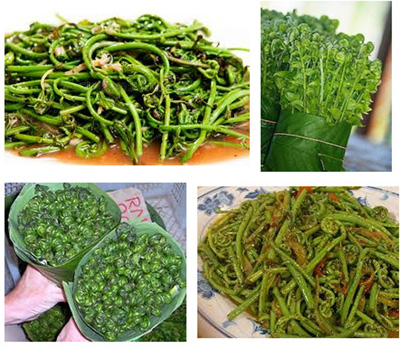 Combo photos of the various types of ferns. — Photos courtesy of netizens.

KUCHING: A university professor has defended the nutritional value of local Midin (or bracken ferns) to refute viral messages not to consume them.

Universiti Malaya Professor Emeritus Datuk Mohamed Abdul Majid said the local ferns – of various types – are not only nutritious, but have a high fibre content and are rich in antioxidants.

“Enjoy your local ferns without fear. They are not only safe but nutritious,” he said through a Facebook posting.

Mohamed added that he was concerned about the viral ‘warning’, which is making its rounds through WhatsApp.

The posting further said the Ptaquiloside is identified to be the main carcinogen of the ferns and to be responsible for their biological effects, such as haemorrhagic disease and bright blindness in livestock and oesophageal, gastric cancer in humans.

“Ptaquiloside has unstable chemical structure and acts as a DNA alkylating agent under physiological conditions. It was first isolated and characterised by Yamada and co-workers in 1983.[2][3] The pure form ptaquiloside is a colourless amorphous compound. It is readily soluble in water and fairly soluble in ethyl acetate. Except in the plants, ptaquiloside has been detected in the milk and meat of affected livestock, as well as in the underground water and dry soil around bracken fern vegetation.[4][5][6] The prevalence of ptaquiloside in daily sources along with its carcinogenic effects make it an increasing biological hazard in modern days,” Wikipedia claimed. The comment can be viewed at https://en.m.wikipedia.org/wiki/Ptaquiloside

“The above warning is misleading in many ways. To lend credibility to the warning, a Wikipedia article on Ptaquiloside with scientific terminology is appended. Ptaquiloside is indeed a carcinogen (cancer causing) compound found in a few ferns such as Pteridium aquilinum (bracken fern), Hypolepis and Pteris. The carcinogen has never been found in the popular Paku midin,” said the professor.

“Therefore, the warning is totally a lie. Furthermore, Malaysians do not consume Pteridium aquilinum, which contains the carcinogen. Pteridium aquilinum (bracken fern) is found in Malaysia and also all over the world. In Malaysia, this species proliferates in secondary forests which have been burnt down. This fern is not appetising as the texture is extremely fibrous and hard. However, the Chinese, Koreans and Japanese do eat the young fronds of the bracken fern after boiling them to get rid of the carcinogen. Ptaquiloside has not been found in the fern species which Malaysians consume,” added Mohamed.

Malaysia is a land of ferns. It is estimated that Malaysia has 1,165 species of which 608 are found on Mt Kinabalu alone (The African continent has less number of ferns than Mt Kinabalu). United Kingdom has only 54 species. About 50 species of local ferns are used either as food or medicine. Although many species are edible, only five are consumed commonly.

The commonest fern consumed in Malaysia is called ‘Paku pakis’ (Diplazium esculentum) which grows in wet areas. The fresh and boiled leaves have a high fibre content and antioxidative activities higher than alpha-tocopherol. No carcinogens have been found so far.

The Sarawakian favourite is ‘Paku Midin’ or ‘lemiding’ (Stenochlaena palustris). Research has shown high content of phenolic compounds and it is a good source of antioxidants.

“Paku uban” or ‘Paku kubuk’ (Nephrolepis biserrata) is consumed by Ibans in Sarawak. Cooked with local torch ginger, it is used to increase lactation in young mothers.

An attempt was made by The Borneo Post to find out if any substantial finding has been made on the correlation between cancer and ferns in Sarawak.

When asked if Sarawak indeed is one of the places that recorded highest rate of stomach cancer due to eating this midin fern or paku pakis, Minister of Local Government and Housing Datuk Dr Sim Kui Hian said a research is necessary since there is already a hypothesis.

“Good topic to do research for now that we have a hypothesis’” he said when contacted.

State Health director Dr Jamilah Hashim, being cautious, said some of the materials in the Wikipedia comment might have been modified or added on by some people, which would make it hard for her to verify.

“Difficult to say as I have no information on the association between the two (ferns and cancer). The ‘study’ isn’t conducted by our department. The comments have to be evidence-based,” she pointed out.

Sarawak Biodiversity Centre spokesperson also doubted if there is any correlation done, saying one has to look into the chemical make-up and content of the species first and foremost.