Sunday, September 25
You are at:Home»News»12th Sarawak Election»‘Environment conservation should be part of manifestos’ 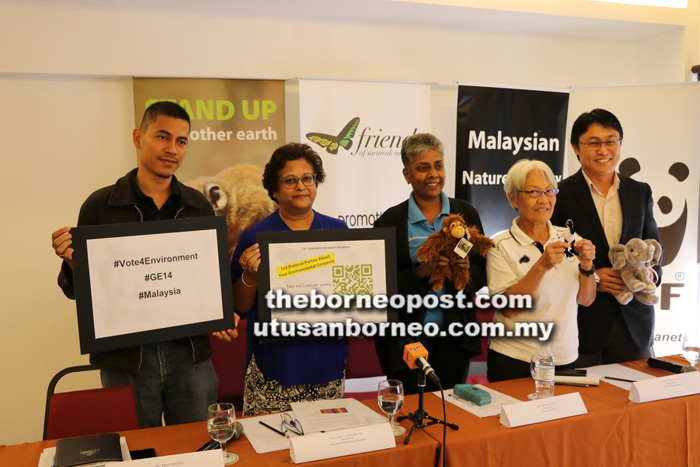 Hon (right), together with (from left) Iqbal, MacGillivray, D’Cruz and Au at the press conference.

KUCHING: Three non-governmental organisations (NGOs) from Sarawak namely Sarawak Society for the Prevention of Cruelty to Animals (SSPCA), Friends of Sarawak Museum (FoSM) and Sarawak Eco-Warriors, have joined 17 other NGOs from Malaysia to call on political parties in the country to place greater emphasis on environment conservation in their manifestos.

Programme leader of World Wildlife Fund (WWF) – Malaysia Sarawak Dr Jason Hon said the 20 NGOs have signed an ‘open letter’ urging political parties to prioritise environment and sustainable development in their manifestos to enable the public to indicate to politicians the environmental matters they are concerned about.

“The ‘open letter’, published on WWF-Malaysia’s website in January, was initially signed by 18 NGOs, but today (yesterday), we are pleased to note that Sarawak Eco-Warriors and Hunger Hurts have also signed the ‘open letter’ to show their support,” he told a press conference here yesterday.

Hon said since the ‘open letter’ was published, there has not been any response from any political parties thus far.

However, he believes that the  message conveyed through the letter has reached them.

“We are now entering a period where the candidates will be campaigning for the 14th General Election and we would like to appeal to them to inform voters on how they will work towards realising the aspirations on environmental conservation for the benefit for the people.

“We also hope that when the government is formed after the election, we want to see what their pledge is, at least for the first 100 days when they are in office, and how they want to work towards achieving development in a sustainable way without compromising our environmental assets, social systems and cultural resources.”

Meanwhile, MNS Miri branch chairman Iqbal Abdollah said an online survey on environmental concerns was carried out between February and March whereby 86 per cent of the 1,603 respondents were concerned with pollution of rivers and seas.

“The survey also found that more than 84 per cent were concerned with deforestation while another 80 per cent were equally concerned with rubbish not properly managed/recycled; loss of park/forests/beaches/natural areas to development; and climate change/global warming/extreme weather.”

Also ranked high among respondents were concerns for illegal hunting and sale of endangered animals (75 per cent), air pollution from vehicles, factories/open burning (72 per cent), forest fires/haze (69 per cent), and over fishing/less and less fish in the sea every year (61 per cent).

Also, 84 per cent of the respondents have expressed their interest to know more about political parties’ environmental aspirations for the nation while another 69 per cent said they consider the environment as one of  factors that would decide their votes on polling day.

The online survey is still open for responses and those who are interested to participate can access it via http://www.bit.ly/GE14envSv.