Tuesday, August 16
You are at:Home»Features»Young mathematician scores a triple distinction 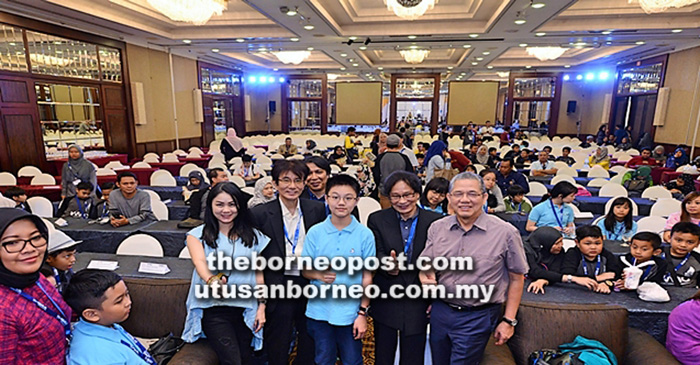 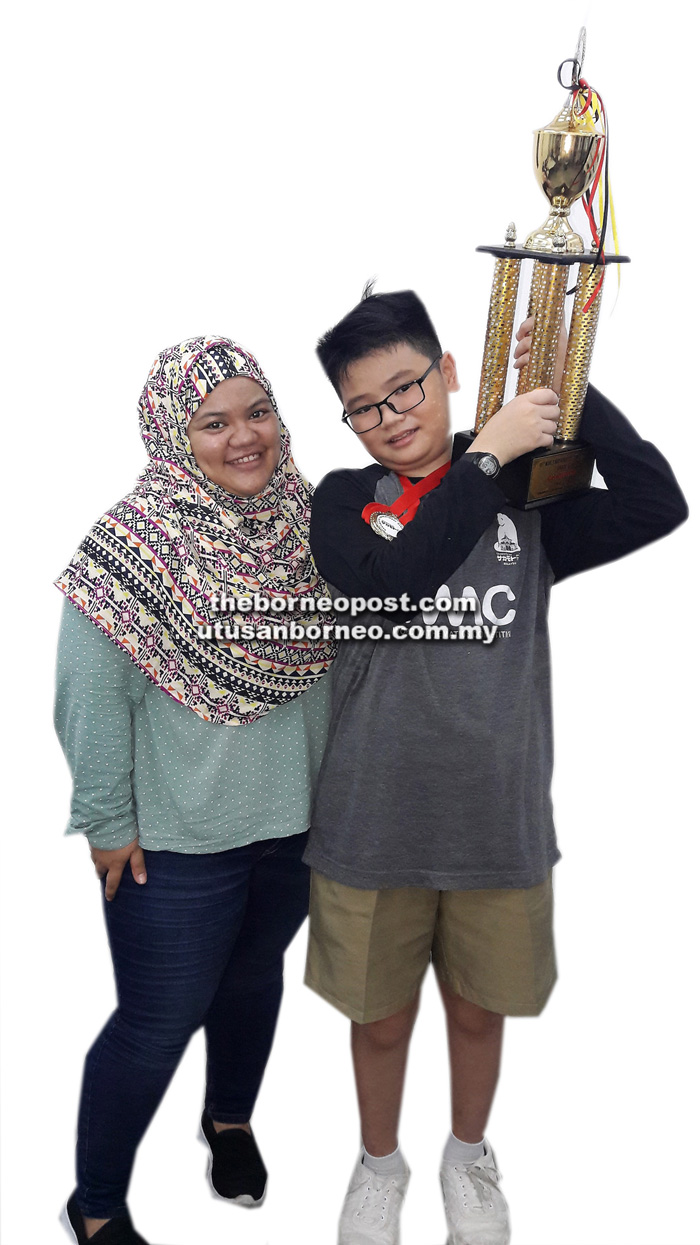 Grand champion and gold medallist Kuek with his teacher.

The 13-year-old not only lifted the gold medal and the Grand Champion title in the Level 4 Category, but was also the first in the country to achieve both in the series.

Kuek from Kuching was among 47 young Malaysians, aged eight to 14, taking part in the competition. Of that number, one was from Kuala Lumpur while the rest were Sarawakians.

The competition was open to countries adopting the Sakamoto Maths Method of Japan. Students from Indonesia, Myanmar, Thailand, Singapore, and the Philippines were among the participants.

Kuek told thesundaypost he has loved maths since Primary 3 because he liked counting. He was never afraid of the subject and was always excited when it came to maths period in school.

To prepare for the competition, he practised for two hours every day.

“I’m very happy to win the gold medal and the Grand Champion trophy – and also be the first to do it. Actually, it was quite unexpected. I joined the competition because it was held in Kuching,” he said.

He pointed out that excellence in maths comes with practice, understanding the basic principles, solving lots of maths questions and learning from mistakes.

“Don’t be afraid to tackle more advanced maths problems. We should also participate in competitions to gain experience and join the right training centre like Sakamoto,” said Kuek, who loves science as well because the two subjects are inter-related. 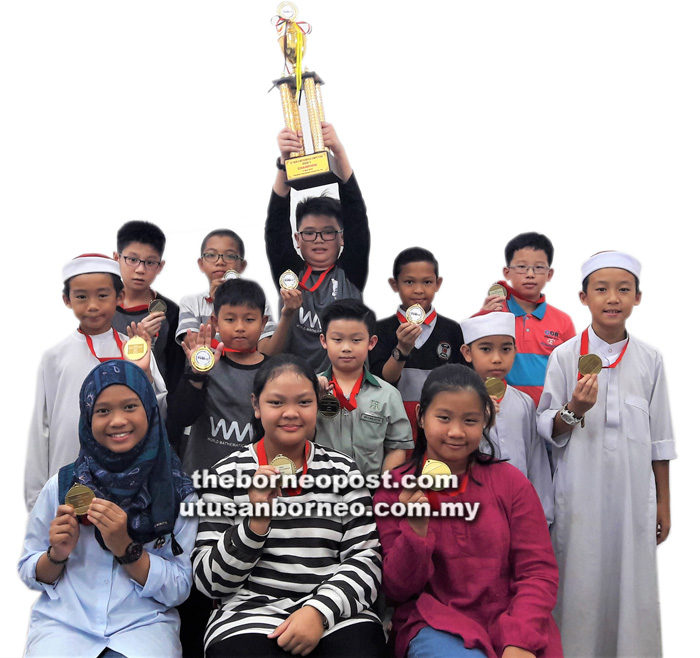 The gold medal winners from Sarawak. 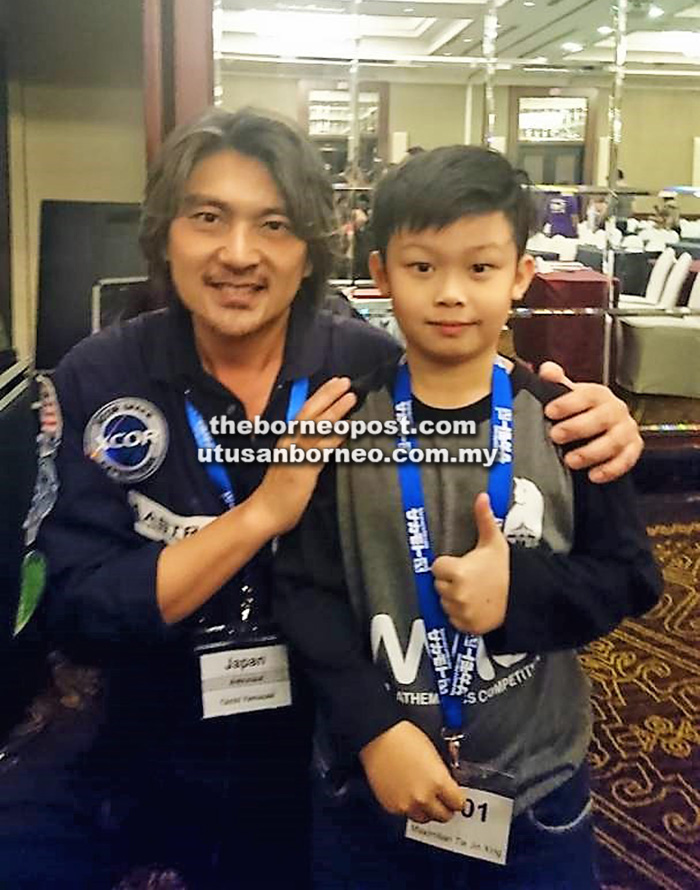 A moment to cherish for Tie with Yamazaki.

also met up with several of the gold medallists from Kuching for a chat.

Two-time gold medallists Jad  and Najmi admitted they felt the pressure in keeping up their standards after winning gold medals last year.

“But I’m happy I made it again this year although I did find the questions tougher,” Jad said, adding that he loves everything about maths.

Najmi, on the other hand, found the questions easier this year and was happy to bring home the gold medal again.

“I love multiplication the most because it’s so much fun seeing numbers increase very quickly,” he said.

For Yap, maths is quite a challenge but the 11-year-old said the challenge was what prompted him to tackle the subject.

He said maths had given him more than what he bargained for in that solving mathematical questions forced his brain to work harder but the upside, he pointed out, was that this has enabled him to think more creatively and logically.

The spillover effect also helped him to write essays with more creativity and logic, he added.

“It’s because maths is hard that I love it. I remember I first fell in love with the subject when I was seven. It was love at first sight and so my romance with maths continues today.”

Twin brothers Aiman and Iman, 11, said they looked at maths in a slightly different way.

To them, maths questions are like games – fun to play with, yet educational.

“Maths is quite easy to learn. I love multiplication the most and, of course, I love science too,” Aiman said.

As for Iman, apart from maths, he finds English another very interesting subject.

“The unique thing about English is that its grammar has rules but the rules don’t apply to all parts of the language. For example, geese is the plural of goose – not ‘gooses’.”

The twins confessed they were very nervous when the results were announced and never expected to win.

Primary 5 pupil Angeliana said she was smothered with kisses by her parents for winning the gold medal, and she also felt very special when her parents treated her to a nice dinner to celebrate her success.

“It was a happy and proud moment for me because, honestly, winning the gold medal was a surprise.”

Angeliana said she has loved maths since Primary 1.

“When I work on maths problems, I feel like solving challenging puzzles. I don’t think maths is a really hard subject to learn if one has the interest.”

He described the achievement this year as “a historic victory” because Malaysia won 45 medals – a vast improvement over last year’s haul of 24 medals (two gold, four silver, and 18 bronze).

At the 14th World Mathematics Competition in Manila, the Philippines, the only gold medallists from Malaysia were Jad and Najmi.

Haikal said Malaysia has come to realise the need to change the methods of teaching and learning maths to be on par with world standards.

“A strong foundation and more advanced maths at the secondary level are required to achieve this target. This means teachers will have to be upgraded to meet global aspirations, demands and assessments required by the Trends in International Mathematics and Science Study (TIMSS) and Programme for International Student Assessment (Pisa).”

Haikal said he bid for Malaysia to host the 15th series to bring a world-class maths competition to the country.

He said he aspired to raise the learning of maths in Malaysia to a level comparable to countries such as Japan, Korea and Singapore, adding that he liked to see children develop the abilities to think and work logically.

“Besides bringing world-class education to kids, we are also aiming to help them develop a higher order in their thinking skills so that they will be more creative, logical, and analytical.”

The participants this year also had the opportunity to attend a Space Talk by Japanese astronaut Taichi Yamazaki and meet the creator of Sakamoto method Dr Hideo Sakamoto.

The Sakamoto Method was created in 1975 and has been used successfully by thousands of students to excel in maths.

The Sakamoto Method is used in high-achieving countries such as Japan, Singapore and South Korea.

Haikal said it’s an innovative method for solving maths problems, providing students with a simple, yet systematic and structured technique to analyse questions in a logical way and solve them.

“The heart of the Sakamoto Method lies in a three-step method to solve any maths problems. Simplicity is its strength. Even complex algebra problems can be tackled using the method,” he added.