Wednesday, October 20
You are at:Home»Business»Malaysia Airports sees record results for 2017

KUCHING: Malaysia Airports Holdings Bhd (Malaysia Airports) has attributed its record results for the financial year ended December 31, 2017 (FY17) to the various operational improvements, efficiency measures and strategic partnerships it had undertaken throughout the year.

This was mentioned during its 19th Annual General Meeting (AGM) held on Tuesday in Kuala Lumpur.

During the AGM, the board of directors unveiled that Malaysia Airports achieved a record revenue and earnings before interest, tax, depreciation and amortisation (EBITDA) of RM4,652.3 million and RM1,910.9 million respectively. Basic earnings per share stood at 10.82 sen for FY17 in comparison to 0.94 sen for FY16.

“Since I came on board in June 2017, I witnessed commendable performance growth both on the financial and operational fronts.

“Our good performance is indicative of strong foundations and robust strategies we have set in motion under our five year business plan, Runway to Success 2020 (RtS2020),” Malaysia Airports chairman Tan Sri Dato’ Seri Syed Anwar Jamalullail said in his statement.

As part of Malaysia Airports’ commitment to enhance shareholder’s value, the Board proposed final dividend of eight sen per ordinary share amounting to RM132.7million which was approved by shareholders at the AGM.

Together with the interim dividend of five sen per ordinary share paid in June 2017, the total dividend of 13 sen per share in FY17 is 30 per cent higher than FY16.

The shareholders had also approved all other resolutions tabled during the AGM.

Combining the operating performance of Istanbul Sabiha Gokcen International Airport (ISGA), Malaysia Airports’ network of airports handled 128.0 million passengers in FY17, representing a 7.9 per cent growth over FY16. In 2017, KLIA alone registered 58.6 million passengers, with a growth rate of 11.2 per cent outpacing its regional peers such as Changi, Bangkok and Hong Kong.

In FY17, Malaysia Airports achieved a significant milestone under the Air Cargo & Logistic cluster with the ground breaking of KLIA Aeropolis’ Digital Free Trade Zone (DFTZ) Park. The DFTZ Park is a strategic collaboration with Cainiao Network, the logistics arm of the Alibaba Group to develop and operate a regional trans-shipment hub for e-commerce.

In FY17, there were several other notable developments that strengthen Malaysia Airports’ position as a key regional airport hub. Malaysia Airports entered into a strategic collaboration with Tourism Malaysia in November 2017 as part of a robust plan to promote inbound traffic globally, focusing on tourist from China, India and Europe.

During the year, Malaysia Airports also partnered with the world’s largest online and mobile-payment system, AliPay. By collaborating with Alipay, Malaysia Airports hopes to create awareness, boost interest and also strengthen its brand positioning among travellers from China.

In addition, the world’s first proof-of-concept (POC) for Hajj pre-clearance was done in August 2017 at KLIA in collaboration with the government of the Kingdom of Saudi Arabia.

The POC proved that by conducting pre-clearance at the point of departure would significantly shorten the immigration process in Saudi Arabia thus providing great benefits to the passengers and increase KLIA’s attractiveness as a key gateway in the region for pilgrims to travel to Saudi Arabia.

“We are on track to deliver the initiatives outlined in the RtS2020 Business Plan. Moving forward, we will build on our rapid growth over the past few years by driving service improvements,” Malaysia Airports managing director Datuk Badlisham Ghazali commented on the outlook.

“Malaysia Airports strong financial results in 2017 reaffirms our proven business strategies. We are confident that Malaysia Airports is well placed to meet any challenges ahead and maintain our earnings momentum in 2018.” 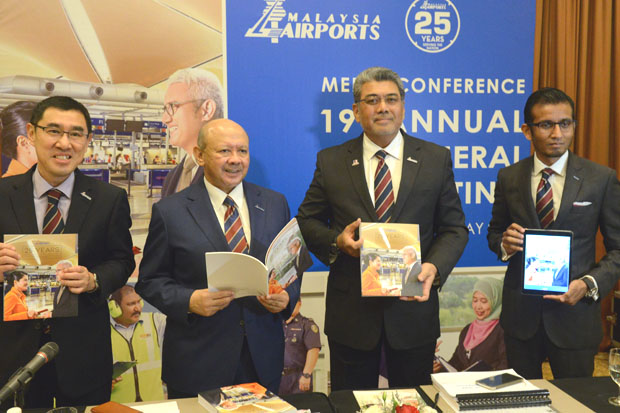