Wednesday, December 7
You are at:Home»News»Sarawak»‘It’s business as usual for state government’ 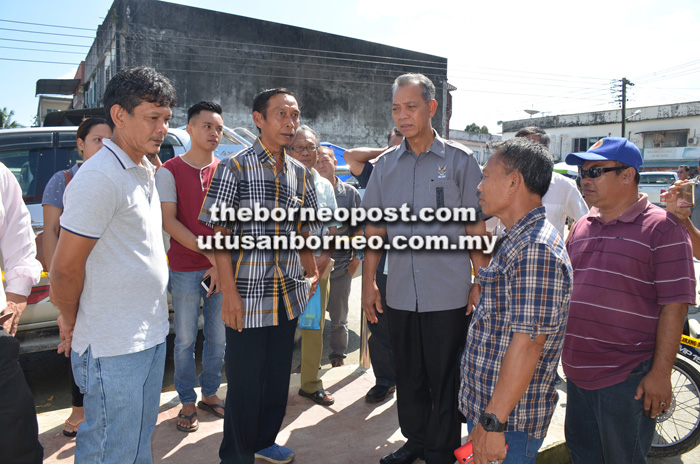 Ahmad (second left) voices out to Penguang (centre) the problems faced by owners of the shops and stalls, whose premises were destroyed in a fire last Saturday.

This assurance is given following the concern raised by several local community leaders and constituents over the current status of the state government, which now stands on the opposition side.

The just-concluded 14th general election (GE14) culminated in Pakatan Harapan (PH) achieving the simple majority in Parliament to form the next federal government. PH emerged victorious by winning 121 out of 222 parliamentary seats, leaving Barisan Nasional (BN) – the former ruling coalition that had governed the country for more than 50 years – with only 79 seats.

“Sarawak and Sabah are equal partners with Peninsular Malaysia in the Federation of Malaysia. The federal government needs Sarawak – and likewise.

“Although we are from different parties, mutual understanding is always there,” said Dr Penguang in a press conference here yesterday.

He pointed out that Sarawak, being an equal partner in the federation, had its own rights and privileges over certain matters, including those concerning land and local authorities.

In this regard, he advised his constituents to ‘not worry too much and express baseless judgements’. He also disclosed that Parti Pesaka Bumiputera Bersatu (PBB) – the backbone party of BN Sarawak – would call a meeting this Wednesday, to be attended by members of its supreme council.

According to him, the aim of this meeting is to discuss and determine the direction of the party.

“Regardless of the current political situation that is always changing over time and which party I belong to, as an elected people’s representative, I pledge to continue to serve the ‘rakyat’ (people) – they are ones who chose me to become their representative and thus, it is my sole duty to serve them.”

At the press conference, a total of nine local shop owners received compassionate funds of RM500 each. They lost their shops to a fire last Saturday, which razed down a two-storey commercial block at Beluru in Bakong near here last Saturday.

“I promise to bring this matter to the State Disaster Management Committee, in seeking assistance to relieve the burden of all those affected by the fire.

“I will also utilise my MRP (minor rural project) grants to level the ground at the site of the fire, before we can proceed to reconstruct the shops,” said Dr Penguang at the event, which also hosted Sarawak Bumiputera Traders Association Bakong branch chairman Ahmad Dalau.

According to Ahmad, the cause of the fire and total losses are still being ascertained.