Tuesday, March 2
You are at:Home»News»Sarawak»Closing ranks in defending rights 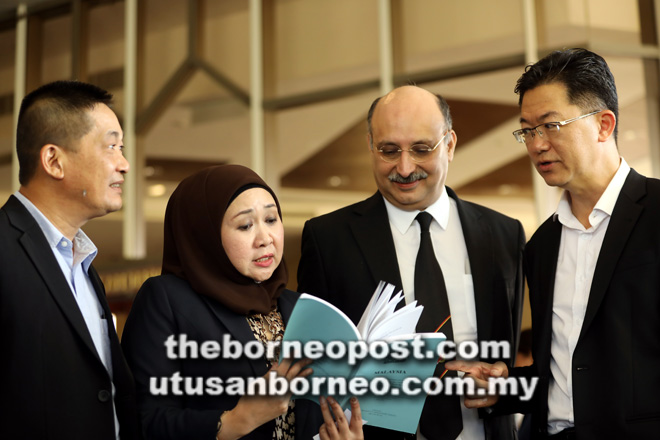 KUCHING: Sarawak lawyers from both sides of the political divide rally to protect Sarawak’s rights in the oil and gas industry.

Yesterday, nearly 50 lawyers from across the state, some of whom have different political affiliations and ideologies, had a meeting with Chief Minister Datuk Patinggi Abang Johari Tun Openg to give input and ideas pertaining to the Petroleum Development Act (PDA) 1974.

The meeting was held following Petronas’ action to seek legal redress in the Federal Court, to its oil and gas rights in the state.

“The lawyers are doing it for free …we are going all the way for Sarawak, tooth and nail, not even an inch we will surrender. Everyone is united in support of the Chief Minister on this suit. It is a good thing for Sarawak.

“As far as the AAS is concerned, they are with us and giving their full support. This has nothing to do with political alignment or political stand, this is for Sarawak,” said Sharifah Hasidah.

She pointed out that Sarawak government was still waiting for the cause papers of the relevant suit, and will deal with the issues as they come and in communication with Sarawak Attorney-General, who would also lead Sarawak’s legal team.

Sharifah Hasidah also pointed out that a special taskforce would be formed to assist Sarawak government in looking into all matters relating to the Malaysia Agreement 1963 (MA63) and Sarawak’s rights, to which Abang Johari had consented.

“Abang Johari is open and welcomes all the support from the people and anyone who can give their views and legal opinions. We want the best legal brains to help us in this fight for Sarawak,” she stressed, adding that the meeting was good with the solid support from local lawyers.

Ranbir Singh assured that AAS would give full support in the fight for Sarawak’s rights under the MA63.

“We will assist in any way we can when it comes to protecting Sarawak’s rights under the MA63,” he pointed out.

Tourism, Arts, Culture, Youth and Sports Minister Datuk Abdul Karim Rahman Hamzah, who is also a lawyer by training, was glad to note the strong support from the local lawyers in fighting for Sarawak’s rights.

“The beauty of all this is all Sarawakian lawyers are with us (Sarawak government) and concerned about our rights,” he said, adding that local lawyers will have a separate meeting to discuss on the next course of action.

To lawyer Dominique Ng, the court filing by Petronas was a challenge to Sarawak which must be taken to a “different level”.

“If they (Petronas) want to fight us to take our rights, then we must fight them on
MA63…we formed Malaysia for a meaningful purpose. We came together because we have a common goal.

“And now Petronas said they want to own our resources. Since when did Petronas become the government of Malaysia? And if we should fight them, we must go all out and be on the offensive,” Ng, who is former Padungan assemblyman, said.