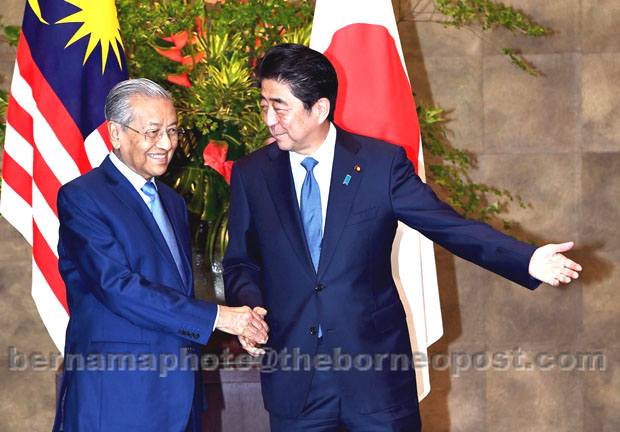 KUCHING: The potential credit line from Japan will be used for Malaysia’s economic development and support small and medium-scale industries, the research arm of AmBank (M) Bhd (AmBank Research) has projected in its latest economics report.

In the new government’s latest bid to bring down the country’s debt level of RM1 trillion, Prime Minister Tun Dr Mahathir Mohamad said Tuesday he has asked Japan to extend a yen credit to Malaysia to which his counterpart Shinzo Abe said he would consider the request, according to a Bernama article.

On this, AmBank Research observed that the decision to seek credit from Japan resembles the scenario of the 1997 Asian financial crisis (AFC).

“After a four-year halt of the Japanese Official Development Assistance (ODA), Malaysia sought help in 1998 following the AFC as the country ran into difficulties,” it said.

“We have been seeking financial aid from the Japanese government since the First Malaysia Plan, and would have been exposed to a total of more than US$2.8 billion.

The research arm felt that the latest request suggests the country could potentially run into difficulties due to the huge public debt and the need to balance the books with a fiscal deficit-to-gross domestic product (GDP) ratio at 2.8 per cent.

“In our view, the potential credit line from Japan will be used for economic development and support small and medium-scale industries to ensure the economy continues to grow at a sustainable pace without straining liquidity.

“While the credit facility should help support the domestic economic activity, it also provides room for the government to continue ‘cleaning up the red files’ without disrupting the economic growth.”

AmBank Research expected the loans to be on a special rate of around one per cent or even lower, depending on the type of projects, over a long-term period of 30 to 40 years.

The research arm noted that the country has also requested Japanese assistance to improve existing railroads to increase the frequency of freight and passenger trains running on underused tracks and stations with the aim of reducing road traffic and enhance rail transport.

“The high-speed rail (HSR) system will only be considered in the future due to the high costs, suggesting upgrading the existing rail lines will suffice for the near term.”