Monday, January 24
You are at:Home»Business»‘Govt decision to continue ECRL a good move’ 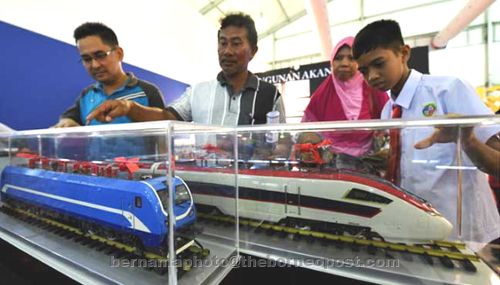 Members of the public are seen looking at train models. Various estimates have claimed that the China-backed ECRL could be done for less than RM40 billion but that its cost had been inflated to RM60 to RM70 billion. — Bernama photo

KUALA LUMPUR: The Pakatan Harapan (PH) government’s decision to continue with the construction of the East Coast Rail Link (ECRL) albeit at a lower cost is a good move and in the right direction, MCA publicity spokesman and Religious Harmony Bureau chairman Datuk Seri Ti Lian Ker said.

“Putting politics aside, this is a good move as the ECRL brings many benefits to the East Coast states and was studied since the 1980s,” he said.

“It also shows that the government is listening to the people and has the people’s interests at heart beyond politics,” he said.

Ti felt that the ECRL is a necessity to reduce congestion and facilitate economic growth, saying it is catalytic for the East Coast’s economic development.

“It is a project approved after much groundwork, consultation and expert input. Stopping it will be a waste and an injustice to the people of the East Coast states.

“If the government thinks the cost is too high or if the terms of the ECRL deal were unusual, then the right step to take is to renegotiate the price and terms. The project is too important to the people of Kelantan, Terengganu and Pahang,” he told Bernama when asked on PH’s decision on the ECRL.

On Friday, Finance Minister Lim Guan Eng told a news portal that the PH government will proceed with the ECRL but is committed to re-negotiating the pricing. According to him, RM20 billion has been paid-out.

Various estimates have claimed that the China-backed ECRL could be done for less than RM40 billion but that its cost had been inflated to RM60 to RM70 billion.

“If there is a problem, the government should solve it instead of taking the easy way out to cancel the project and in the process, pay a huge penalty and take away the economic opportunities which the East Coast population can derive from the project,” he said.

Ti also stressed that if the government feels there are kickbacks in the project, then the Malaysian Anti Corruption Commission (MACC) should step in.

“Give MACC the authority to investigate this thoroughly so that all parties are satisfied. The ECRL also does not need the taint of corruption.

“Public transportation in Malaysia is still very much underdeveloped and more so in the East Coast, as most of the country’s infrastructure projects have been concentrated in the West Coast states.