Monday, November 28
You are at:Home»Business»BNM expected to keep OPR at 3.25 per cent 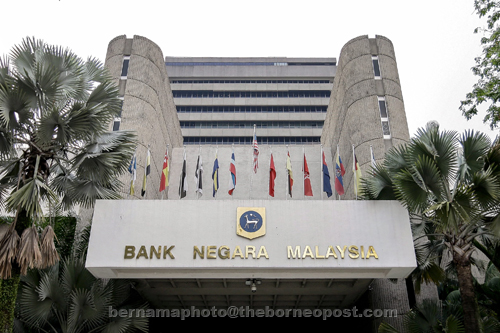 The firm believes that BNM is likely to look past the volatility in inflation and focus on growth in its monetary policy decision-making. — Bernama photo

It said the zero-rating of the Goods and Services Tax (GST) effective June 1 was likely to result in a one-off dip in inflation.

“However, BNM is likely to look past the volatility in inflation and focus on growth in its monetary policy decision-making.

“We maintain our status-quo call for 2018, as we expect the growth to moderate from the strong levels in 2017, but remain firm,” the research house said in a statement yesterday.

However, StanChart noted a potential risk to its call – if the ringgit faced strong depreciation pressure on broader weak risk sentiment, the central bank may need to hike its rates to maintain foreign exchange stability.

Meanwhile, it expected that the May 2018 industrial production index (IPI), to be released by the Statistics Department on July 12, would show growth in IPI easing to 2.8 per cent year-on-year (y-o-y) from 4.6 per cent y-o-y in April 2018 due to fewer working days following the election.

It added that the mining sector was supported by a pick-up in crude oil production (3.4 per cent y-o-y), likely due to higher oil prices.

“However, the sector may have been weighed down by a 7.8 per cent y-o-y fall in crude palm oil (CPO) production due to lower CPO prices. Passenger car production fell 7.5 per cent y-o-y and probably also weighed on overall IPI growth,” it said. — Bernama