Wednesday, July 6
You are at:Home»News»Sabah»Partnerships, engagement key to finding solutions in managing sharks and rays in Sabah 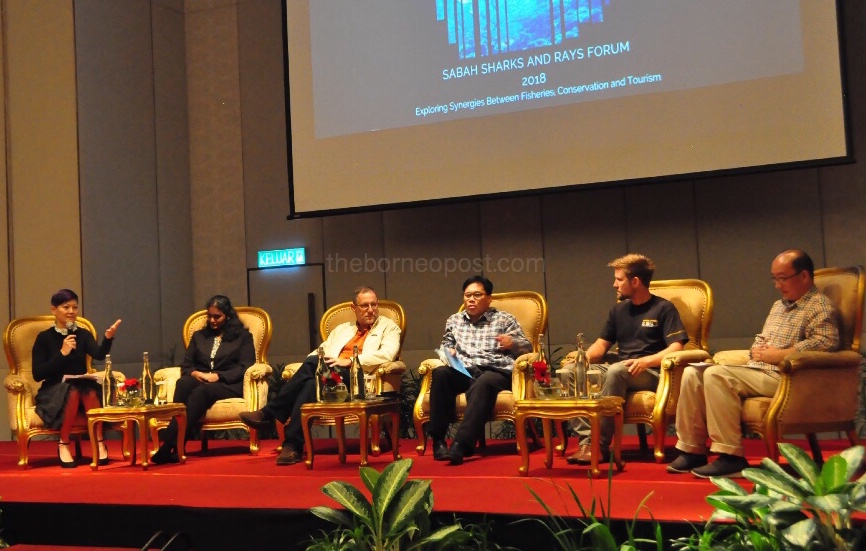 KOTA KINABALU: The establishment of strategic partnerships, as well as honest and continuous engagement, are needed in approaching the complex issues surrounding the conservation of sharks and rays in Sabah.

Although their reasons and motivations differ, stakeholders at the recently concluded Sharks and Rays Forum 2018 agreed they want to see an abundance of sharks and rays in Sabah waters.

Different sectors of society – fishermen, tourism players, civil society, government and researchers – each have their own priorities for healthy shark and ray populations.

Subsequent progress must therefore address the concerns of all – in particular the views of those in Semporna, the most important district in Sabah for shark-related fisheries, tourism and protection.

“This will need to see collaboration on a wide scale, working with a range of stakeholders and the Department of Fisheries to enable more meaningful input into the National Plan of Action for the Conservation and Management of Sharks (NPOA 3).

“For example, some fishermen may not necessarily be keen on alternative livelihoods in the tourism sector, and there are some who say they are only responding to market demands. We also heard that understanding and defining bycatch is crucial for further shark conservation efforts as many sharks are caught as bycatch – a trend mirrored worldwide.

“Other efforts that could be looked at would be to trial shark and ray bycatch reduction techniques on trawlers, and to assess the viability of establishing a locally managed marine area with sharks and rays as the main drawcard that is self-funded through tourism in Semporna,” Ong said.

She said the recommendations, agreements and recognition that sharks and rays are important for healthy tourism and sustainable fisheries have inspired leadership, scientists and local conservationists to strive together for a healthy ocean that include sharks.

One major outcome of the conference was that research groups are keen to work with government and the fisheries industry to gather additional scientific knowledge of local shark and ray populations and to support increased marine protection in Malaysian waters. The fisheries sector meanwhile, said it was willing to be engaged on how it could improve, but without losing its economic and trade values.

Other areas of future work that emerged from the forum included improved monitoring of shark and ray catch at markets to species level – to gather baseline data at species level, as well as determining whether protected areas such as the Tun Sakaran Marine Park – have seen an increase in shark and ray abundance
Relevant parties would also need to continue promoting awareness on the importance of sharks and rays, as well as the negative impact to the environment when consumers opt for shark fin soup as sharks are apex predators and are essential for maintaining a healthy marine ecosystem.

Sabah Sharks Protection Association (SSPA) chairman Aderick Chong stressed on the need to list species of sharks that are known to be abundant and to limit harvesting to these, and to protect the rest.

“There were many different viewpoints, but the forum showed that all parties are positive about moving together towards a common goal of seeing more sharks and rays in our waters.

“We must continue to explore the suggestions that were raised and we must do this with an open heart and mind. It is about finding solutions that work,” he said.

The Sabah Sharks and Rays Forum 2018 gathered Malaysian, regional and international experts to explore synergies between fisheries, conservation and tourism. It provided an update on advances in shark and ray focused legislation, research and awareness raising in Sabah.