Friday, September 24
You are at:Home»Business»Primary Industries Ministry to enhance usage of biodiesel 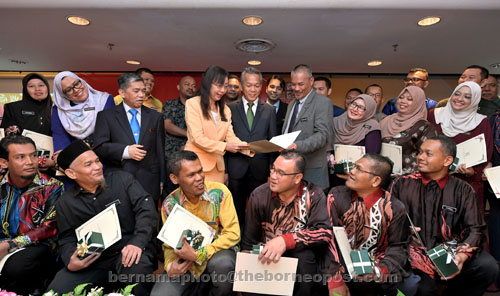 Kok poses for a photo after presenting excellence service awards to employees of the Malaysian Timber Industry Board. — Bernama photo

KUALA LUMPUR: The Primary Industries Ministry is currently conducting dialogues with industries including the automotive sector and petroleum-based companies on enhancing the usage of biodiesel in the country, said its Minister Teresa Kok.

Up to now, there has been no development as the dialogues are ongoing.

“We must get the agreement of all parties but I hope Malaysia will move forward towards that direction just as what Indonesia has done,” she told reporters after presenting excellence service awards to employees of the Malaysian Timber Industry Board.

CPO, which is currently trading at RM2,200 per tonne, is the main feedstock used in the production of palm methyl ester or biodiesel.

Recently, the Indonesian government has announced its plan to make the use of biodiesel blended fuels mandatory for vehicles and heavy machinery beginning Sept 1, a move to save billions of US dollars in diesel imports. As at end-June 2018, palm oil inventories stood at 2.19 million tonnes, up a whopping 43 per cent, from a year ago.

On a related matter, Kok said palm oil will be among the topics to be highlighted during Prime Minister Tun Dr Mahathir Mohamad’s visit to China later this month.

The delegation would include officials from the Ministry of International Trade and Industry, Foreign Ministry and Agriculture and Agro-Based Industries.

“We will be going to China on a mission to boost our palm oil exports. Currently my ministry is working on establishing a Memorandum of Understanding with China companies and also hope to seal some agreements during the visit,” she said.

Earlier, in her speech, Kok said the commodity sector generated RM140 billion in foreign exchange in 2017, making the industry the second largest revenue earner for the country.

As for the timber industry, its contribution last year to the government coffers rose 4.8 per cent to RM23.2 billion. — Bernama