Wednesday, October 20
You are at:Home»Business»SSM to offer 50 to 80 pct discount on compounds imposed 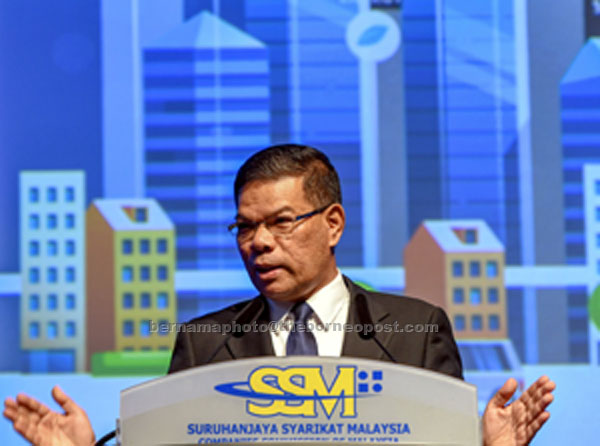 Saifuddin is seen giving a speech during the the SSM National Conference 2018 themed, ‘Doing Business In The Age Of Disruption’. Saifuddin announced that SSM will offer discounts of between 50 per cent and 80 per cent, from September 1 to December 30, 2018, to companies with outstanding compounds. — Bernama photo

PETALING JAYA: The Companies Commission of Malaysia (SSM) will offer discounts of between 50 per cent and 80 per cent, from September 1 to December 30, 2018, to companies with outstanding compounds.

“The reduction is based on the different quantum applicable for the month payment is made, that is 80 per cent in September, 70 per cent in October, 60 per cent in November and 50 per cent in December,” he told a press conference after launching the SSM National Conference 2018 themed, ‘Doing Business In The Age Of Disruption’ here yesterday.

He said the campaign would be implemented nationwide and urged all relevant parties to take advantage of the discounts offered.

On the reintroduction of the Sales and Services Tax (SST), Saifuddin said the ministry would give its full support to ensure all related bills are approved in both the Dewan Rakyat and state assemblies.

“We can only implement the new SST-related Acts once the related laws are passed by both legislatures.

“Apart from this, we will intensify efforts to take care of consumer interests and avoid excessive price increase in goods due to profiteering,” he added.

“More than 1,000 participants comprising company secretaries, law practitioners, entrepreneurs and stakeholders from the Malaysian corporate sector are attending the two-day conference which would focus on the changing business landscape and the impact of the digital revolution on the economy and globalisation. — Bernama