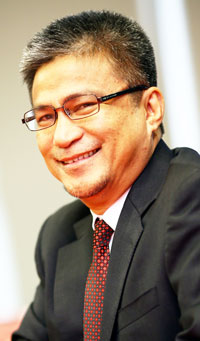 Assistant Minister of Education and Technological Research Dr Annuar Rapaee yesterday suggested that the loan may be used to build state-owned special schools in Sarawak.

He further suggested that the Sarawak government build five such schools across the state and that the setting up of these schools be modelled on that of the private international schools or schools established by missionaries such as SMK Sacred Heart, SMK Methodist, SMK St Elizabeth (all in Sibu) and SMK St Joseph (Kuching) in Sarawak, or established schools like Malay College (Kuala Kangsar) and Penang Free School in the peninsula.

Dr Annuar, who is also Assistant Minister of Housing and Public Health, pointed out that it is imperative such schools be built to narrow the knowledge gap between urban and rural students.

“These proposed schools will be state-owned and fully residential to accommodate students from rural and interior areas.

“Students will be housed in conducive learning environment, equipped with good facilities. Since the schools will be state-owned, we can formulate our own curriculum, or we can implement teaching and learning methods similar to that of private international schools in Sarawak.

“The private international schools are becoming more popular among parents because of their comprehensive curriculum and they emphasise the usage of English language,” he said.

He, however, noted such private schools are beyond the reach of those from the lower income bracket.

“I want to propose to the state government that there must be a special school which has similar (education) approach for B40 (bottom 40 per cent). Otherwise, the gap between B40, M40 (middle 40 per cent) and T20 (top 20 per cent) will widen especially among rural students.

“The RM1 billion (loan offered to the federal government) is more than enough to build four to five special schools across Sarawak,” the Nangka assemblyman added.

Adding on, Dr Annuar reckoned that since Sarawak does not have a large population, building big schools is of no urgency.

In this regard, he said building special schools will be able to cater to the needs, where each of such school can accommodate some 500 students at any one time.

On teachers, he said local teachers or retired teachers could be employed or even engaging expertise from overseas to teach particularly English language besides focusing more on Industrial Revolution (IR) 4.0.

Towards this end, he clarified the proposal should not be misconstrued as trying to take over the role of federal government, but to complement what the federal government is doing particularly, to bridge the rural and urban gap.

He also noted the Sarawak government had invested substantially in tertiary education such as Curtin University, Swinburne University and University College of Technology Sarawak (UCTS).

“I think it is high time now for the state government to invest in formative education in order to mould our students to greater heights.

“Now, it is the time for us to re-look at our approach to give more opportunities to the people especially the rural folk in terms of better education infrastructures and facilities,” he said.