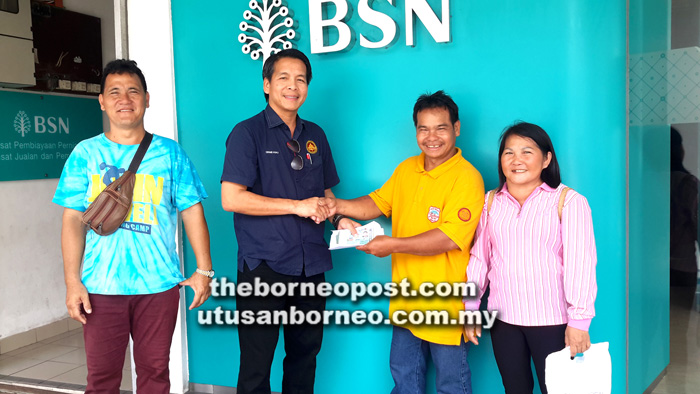 Ayup (second right) shakes hands with Dennis after the assemblyman helped him to collect his mother’s Cola. Looking on are Ayup’s relatives.

MIRI: Telang Usan assemblyman Dennis Ngau is calling on banks to be more flexible to rural recipients of Cost of Living Aid (Cola) who are either too old or bedridden to personally collect the aid.

He said the banks should avoid putting unnecessary burden on the next-of-kin of these recipients who have already been issued with supporting documents from the Inland Revenue Board (IRB) to claim the aid on their behalf.

“It is a burden for rural folk if they have to go to and fro from their villages deep in the interior to get documents required by the bank. It is not cheap for them to make the journey,” he told The Borneo Post yesterday.

He said he wanted to highlight the issue following an incident last Friday where a Penan, Ayup Bong from Long Belok in Ulu Baram, arrived here to collect his bedridden mother’s Cola.

According to Dennis, the IRB had given approval for Ayup to collect the money on his mother’s behalf but he was unable to do so as the bank required a letter from the village chief to certify that Ayup hailed from the village.

He disclosed that Ayup approached him in March for assistance to process his (Ayup) mother’s relevant documents and submit them to the IRB for further action.

“On (last) Friday, Ayup and I went to the bank to get his mother’s Cola money, but were told that the bank needed a letter from the ketua kampung (village chief) to certify that Ayup is from the village.

“If the IRB has already given their approval for the next-of-kin to collect the money on the recipient’s behalf, why would the bank need to ask for more supporting documents?”

He said it took Ayup five hours to travel here in a four-wheel drive vehicle using a timber track road, and that because of the need of the village chief’s letter, he had to travel back to Long Belok and then return again to Miri to submit the letter to the bank.

“It takes a lot of money and time,” added Dennis.

He thus called on banks to be more flexible when it comes to cases such as Ayup’s, especially when approval has already been given by the IRB.