Thursday, August 18
You are at:Home»Business»Future of SMDS depends on three areas 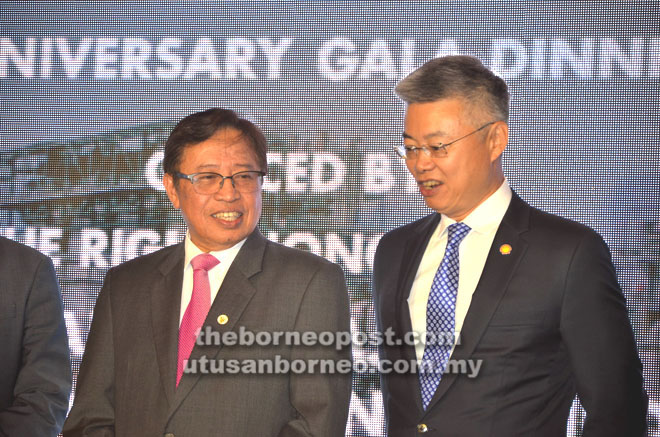 Lo (right) is seen speaking with Abang Johari during the launch of the SMDS 25th anniversary gala dinner.

One, to remain competitive SMDS must continued its technology development programme.

“We have an active programme in our research labs in Amsterdam and here in Bintulu SMDS to ensure that SMDS can compete with a new generation of coal to liquids plant from China,” he said during the SMDS 25th anniversary gala dinner here on Monday.

Secondly, in terms of product development, SMDS must find more innovative and high value uses for its unique products.

“We rely on our own research and development in the US, our distributors and customers and also learning institutions,” Lo added. “A good example is our collaboration with UNIMAS, which has helped us develop an application in 3D printing for Sarawax.”

Thirdly, he said the availability of affordable natural gas feedstock was vital to keep the plant going.

“Our Upstream business has the largest exploration programme in Sarawak, to find gas for all of Sarawak’s need including SMDS. So you can see, Shell is committed to do its part to ensure that SMDS has a bright future,” he added.

Sarawak is a special place for Shell as they discovered Malaysia’s first oil well in Miri in 1910 and ever since, Sarawak has been the beating heart of Shell’s upstream business.

Lo said their role has changed over time, but the fundamentals of finding, developing and producing oil and gas remain the same.

“And so long as we continue to be welcomed by the State, and Petronas, we will be your trusted partner.

“Our business has grown and diversified with Malaysia – from a modest kerosene trader, we have grown into the country’s leading oil and gas producer and marketer.

“Our partnership with Sarawak state extends into the downstream – through Shell Timur, we have the leading fuels and lubricants brands, delivering high-quality, differentiated products to our customers,” said Lo.

He further outlined Sarawakians’ demand the very best from Shell — in February this year, Shell had introduced it best diesel fuel, Euro 5 Diesel, to Bintulu before any other city in Sarawak.

Shell, he added, will continue to explore novel, new partnerships with the Sarawak state government and Shell MDS is a prime example of this.

“SMDS was borne out of Shell’s pioneering research into GTL, which converts natural gas into ultra-pure liquid fuels, lubricants, chemicals and solid waxes.

“Together with our partners, Petronas, Mitsubishi and Sarawak state, we shipped our first cargo of GTL product on 28th of September 1993.

He pointed out that Shell’s GTL Wax is branded SARAWAX, in honour of the state, and is sold in over 50 countries proudly putting Bintulu on the world map.

According to him, the products developed and manufactured here are used in countless applications, from powering jet engines, to making everyday items such as detergents, crayons and candles, food packaging and even lipstick.

“As a Sarawakian, I am proud that SMDS has been a driving force in shaping the global GTL market.

“With the lessons learnt and technology developments in Bintulu, Shell was able to invest in the largest GTL plant in the world, Pearl, in Qatar,” he enthused.