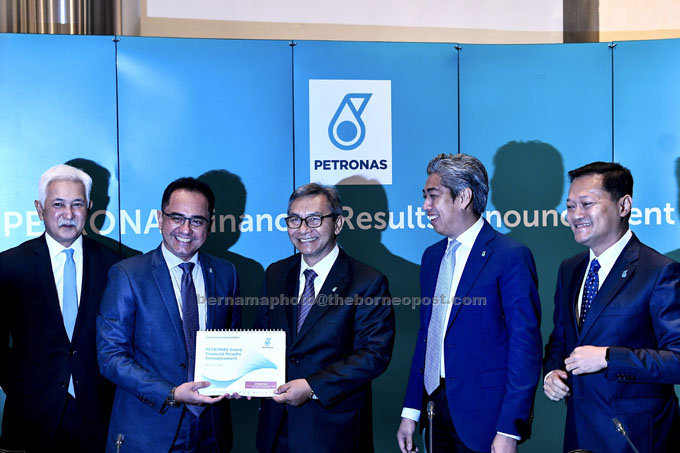 KUCHING: Petroliam Nasional Bhd (Petronas) yesterday announced improved earnings for the first half of 2018, driven by the Group’s execution of its continuous business improvement initiatives coupled with increased commodity prices.

The group recorded RM117.2 billion in revenue, up 8 per cent from RM108.1 billion in the first half of 2017, benefitting from ongoing internal efforts to optimise efficiency as well as higher average realised prices for all products and increased production.

This, however, was largely offset by the effect of the strengthening of the ringgit against the US Dollar exchange rate.

The improved results were posted on the back of higher revenue, lower net impairment on assets and well costs as well as other expenses, compared to the first half of 2017.

According to its president and group chief executive officer Tan Sri Wan Zulkiflee Wan Ariffin, this improvement is attributed to its continuous business improvements and groupwide operational excellence.

We will also endeavour to pursue growth opportunities to ensure Petronas’ long-term sustainability.

“Petronas will continue to play its role in steering efforts that will enhance the competitiveness, capability and resiliency of the local oil and gas industry,” he said when announcing the results yesterday.

“Most importantly, we aspire to nurture a sustainable ecosystem in Malaysia where players not only prosper but also remain competitive in the face of global competition.”

Earnings before interest, tax, depreciation and amortisation (EBITDA) registered a 15 per cent growth to RM52.2 billion, from RM45.2 billion in 1H17.

The decrease was also contributed by movements in foreign currency translation reserves.

Nevertheless, the decrease in equity was softened by the profit generated during the first half of 2018.

Capital investments for the first half of 2018, was RM19.8 billion, mainly attributed to the Pengerang Integrated Complex (PIC) in Johor.

This was largely offset by the effect of the strengthening of the Ringgit against the US Dollar exchange rate.

PAT of RM13.6 billion, registered a marked improvement of 94 per cent compared to RM7.0 billion in the second quarter of 2017.

Similarly, the strong performance was contributed by higher revenue, lower net impairment on assets and other expenses compared to the second quarter of 2017.

These were, however, partially offset by higher tax expenses and increased net product and production costs recorded during the quarter.

The group’s cash flow from operating activities decreased by 10 per cent to RM19.7 billion, from RM21.8 billion in the second quarter of 2017, due to higher working capital and taxes paid which were partially offset by higher average realised prices.