Tuesday, October 4
You are at:Home»News»Nation»Projects not issued with award letters suspended for review — Minister 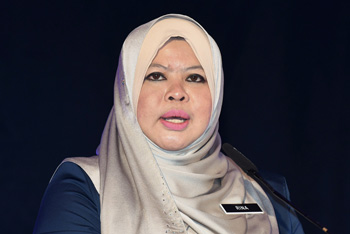 KOTA KINABALU: All projects which have not been issued letters of award will be suspended for review in accordance with the Finance Ministry’s instruction on June 29 this year, including the Rural Water Supply Programme (BALB) and Rural Road Programme (JALB) in Sabah.

“Basically, all planned projects will continue through open tenders.

“However, the projects to be implemented will subject to their urgency and the financial status of the country,” Rina said that in response to Senator Datuk Yong Wui Chung’s question whether the Rural Development Ministry would continue to provide allocations for development, rural road upgrading and rural water supply projects in Sabah that had been approved by the previous government during the Dewan Negara sitting in Kuala Lumpur.

Yong, who is also the secretary general of Liberal Democratic Party (LDP), also asked the ministry if the programmes and initiatives to assist the rural poor undertaken by the previous administration would still be carried out.

Rina said the Department of Statistics Malaysia had reported a drop in poverty incidence from 1.6 per cent in 2014 to one per cent in 2016 based on the EPU’s Poverty Line Income 2016, which stipulated the poverty income threshold at RM880 for Peninsular Malaysia, RM1,220 for Sabah and Labuan and RM940 for Sarawak.

She said the ministry had been consistently implementing rural development programmes such as Housing Programme For the Hardcore Poor (PPRT), Skills Training and Career Programme (PLKK), Income Increment Programme (PPP), as well as entrepreneurship programmes like the Rural Business Challenge and Mobilepreneur to help increase the income of rural folks.

She added a sum of RM271.6 million had been allocated for PPRT this year, which included RM162.9 million to repair existing homes and RM108.7 million to build new houses.

On the other hand, she said the development budget had allocated RM3.86 billion for the Rural Development Ministry this year, of which RM1.795 billion was provided for economic development and income increment programmes for rural folks.

“Through these programmes, the ministry hopes to reduce the income gap between urban and rural residents during the 11th Malaysia Plan (11MP).

“The ministry will also study ways to improve the implementation of existing programmes to ensure the allocation would bring positive impacts and benefits to the rural communities.”

She said her ministry was also in the process of studying new programmes that could be introduced to low income groups, particularly in Kedah, Kelantan, Perak, Sabah and Sarawak.

“The ministry is assisted by consultants from Universiti Kuala Lumpur (UniKL), Universiti Kebangsaan Malaysia (UKM) and Universiti Teknologi Malaysia (UTM) in drawing up the policy and action plan.”