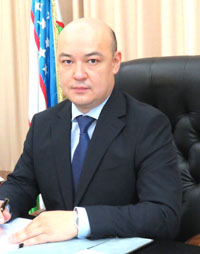 KUALA LUMPUR: With both Malaysia and Uzbekistan’s new political eras in full gear, their existing bilateral relations can be further elevated with expansion in economy, trade and investment, fuelled by the presence of Petroliam Nasional Berhad (Petronas) in the oil and gas (O&G) sectors.

Uzbekistan Ambassador to Malaysia, Rashvan Usmanov said based on the current political and economic spheres in both countries, it was imperative Petronas re-established its footprint in Uzbekistan after significant reforms were adopted by the two-year-old government of President Shavkat Mirziyoyev.

“Petronas is more than welcome to participate in this bid and negotiations,” he said in an interview with Bernama at the embassy here recently, which was conducted in commemoration of Uzbekistan’s 27th Independence Day observed on Sept 1.

Elaborating, Usmanov said there would be sufficient opportunities for Petronas to re-penetrate the market because of its international reputation and involvement, including in some upstream ventures in the central Asian nation.

“Petronas was there before and it is very well-known. If Petronas were present there again, I am sure it would serve as a magnet for others to be there, as well,” he said, noting Uzbekistan’s close partners in the O&G industries of Russia, South Korea and China.

In 2008, Petronas, through a wholly-owned subsidiary, Petronas Carigali Overseas Sdn Bhd signed the production sharing agreement (PSA) for a group of fields and heads of agreement for a gas-to-liquid project in Uzbekistan.

The company signed the PSA with the Uzbekistan Government for the Urga, Kuanish and Akhchalak fields located in Ustyurt. The agreement was for 25 years.

However, it is believed that between 2013 and 2014, Petronas decided to withdraw from all Uzbekistan exploration and production assets for commercial reasons. These include the Surkhanski exploration agreement, Baisun PSA, and the Urga, Kuanish and Akchalak PSAs.

“With the positive development in Uzbekistan, I believe there are possibilities that Petronas may look into re-investing in Uzbekistan,” he said in a written email.

Uzbekistan’s diplomatic relations with Malaysia began in 1992, a year after the republic declared its independence from the Soviet Union, and joined a grouping of former Soviet republics known as the Commonwealth of Independent States. — Bernama