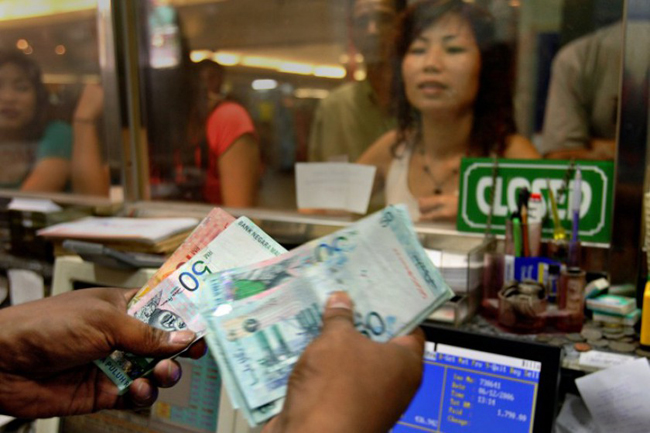 Customers are seen exchanging their ringgit at a currency exchange. Malaysia is perceived as more insulated to EM financial contagion risk compared to countries that have high direct trade and financial linkages to source crisis countries, say economists. — AFP photo

“Despite some similarity and selling pressure, we believe the contagion effect would unlikely spread to this part of the region,” he said.

He said the weak economic fundamentals of the ARS, TRY and BRL are reflected in their twin deficits in both the fiscal and current accounts in the balance of payments, with both Argentina and Turkey suffering large current account deficits that are still deteriorating.

Indonesia and the Philippines are two major Asean countries that also face a similar problem of twin deficits, but the situation is not as serious as in Argentina and Turkey, he said.

Meanwhile, Malaysia and Thailand both enjoy a surplus in their current accounts, he said, noting that their fiscal deficits are well-contained, putting them in a better position to weather the volatility in the financial markets.

MIDF Amanah Investment Bank chief economist Dr Kamaruddin Mohd Nor told Bernama that it was observed last week that the negative sentiment against EMs had also indirectly hit the ringgit despite the country’s solid fundamentals.

“Our current account is still positive and the trade balance is expected to improve in the near term. Nevertheless, if the negative sentiments continue, the ringgit may test the 4.20 level against the US dollar before retreating to the 4.08 to 4.10 level,” he said.

He also noted that the contagion effect is self-fulfilling, with economic problems in one country prompting investors to sell assets in economies with similar risks.

“The contagion risk could spread via capital markets and also trade. Faltering business confidence leads to a drop in investment and jobs that will affect business activities, consumption and growth,” he said.

On the other hand, Sunway University Business School Economics Professor Dr Yeah Kim Leng said Malaysia is not overly exposed to the contagion in the currency market.

He said Malaysia’s healthy economic fundamentals would help the country to attract foreign investments as its exports remain strong and competitive.

He suggested that the country reduce its dependence on foreign currency borrowing in order to minimise the impact of external factors.

“If the government can rebalance the fiscal spending in line with lower expected revenue and remain prudent in spending, I believe we can continue having a positive economy,” he said.

Yeah also noted that Malaysia could withstand any foreign withdrawal of investment as it has over US$100 billion in international reserves.