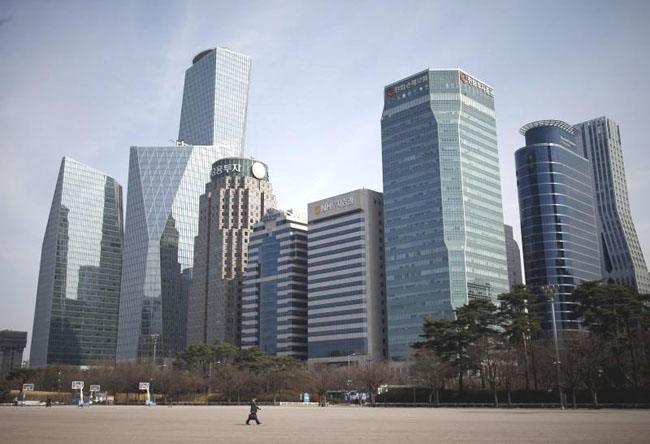 File photo shows a man walking in a park at a business district in Seoul, South Korea. Malaysia’s exports to South Korea amounted to US$8.7 billion, with palm oil being the major export item. — Reuters photo

SEOUL: Malaysia and South Korea have to delve into new areas of cooperation to enhance trade and bilateral ties, the Secretary General of the Asean-Korea Centre, Ambassador Lee Hyuk said.

He said this would also help enhance the bigger picture of contributing to Asean and South Korea’s goal of increasing the bilateral trade volume with the regional grouping to US$200 billion by 2020.

According to Lee, while the Malaysian government had rolled out numerous incentives for foreign investors, South Korean investors had yet to take full advantage of them.

Lee pointed out that trade between both nations was well balanced with South Korean exports of industrial goods and electronics to Malaysia recording US$8 billion.

Malaysia’s exports to South Korea amounted to US$8.7 billion, with palm oil being the major export item.

However, Lee said, Malaysia’s economy was now quite well developed, and hence, South Korean investors might feel there is not much investment opportunities available despite the prevailing incentives

Meanwhile, he pointed out that Malaysia could do more to woo South Korean tourists, as not many of them headed to Malaysia despite the numerous tourist attractions in the multi cultural and multi-ethnic nation.

“It is unfortunate that a little less than 500,000 South Koreans visited Malaysia in 2017, compared with 2.5 million who visited Vietnam, the Philippines (1.6 million) and Thailand (1.7 million).

“Malaysia is a country which South Koreans actually feel is a little bit far off in comparison with other Asean nations like Vietnam, Thailand and the Philippines,” he said.

“In Melaka recently for the Asean-Korea Tourism Capacity Building Workshop, I was truly impressed with the multi-cultural and multi-ethnic background of the nation.

“Apart from this, there are numerous attractions like pristine beaches, historical sites and the never ending gastronomical delights, yet most South Korean tourists shy away from Malaysia,” he said of his own observations of the country.