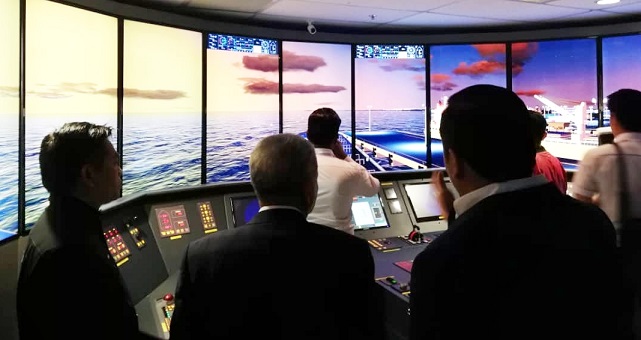 The Transas Navigational Simulators at the BCMC at Wisma Perindustrian in Likas.

Shafie said that as tourism and maritime industries form a significant portion of the total income of the state, the protection of these industries requires advanced technologies that enable authorities and stakeholders to actively monitor and respond to incidents in a timely and coordinated manner.

“Piracy and kidnapping have been an issue plaguing Sabah for a long time. The widely discussed Chinese tourist kidnapping in 2014 and recent kidnapping of Indonesian fishermen in September this year show a dire need to more carefully monitor waters around Sabah,” said the Chief Minister, whose speech was delivered by Assistant Infrastructure Development Minister Datuk Abd Muis Picho, at the launch of BCMC at Wisma Perindustrian in Likas here yesterday.

“Additionally, the large numbers of tourists visiting nearby islands require strong maritime safety measures. This is very apparent after the sinking of an island-bound boat carrying over 20 Chinese tourists in 2017.

“In order to address these issues, technologies such as Front End Intelligence (FEI) Technology, combined with Automatic Identification Systems (AIS) are required. I was informed that these technologies form an integrated system that enable real time interactive, intelligent and event-driven transport management that monitor, communicate, evaluate and respond to events dynamically,” he added.

In addition, Shafie said BCMC has the capacity to protect Sabah’s diverse population of species such as orangutans, clouded leopards and pygmy elephants, living in rainforests that are being cut and degraded for timberland minerals and endangering the existence of valuable species.

“A century ago, most of Borneo was covered in forest. But the region has lost over half of its forests, and a third of these have disappeared in just the last three decades. The increase in these activities is being matched by a growth in illegal wildlife trade, as cleared forests provide easy access to more remote areas.

“Illegal logging and forest fires are the key drivers of deforestation in Borneo. Illegal logging has become a way of life for some communities, with timber being taken from wherever it is accessible, sold to collectors and processed in huge sawmills. In the absence of sufficient alternative economic sources, this is an irresistible lure for the local communities.

“Protection laws are in effect throughout Borneo, but are often inadequate or are flagrantly violated, usually without any consequences as monitoring and enforcement over such large and remote areas are challenging,” he added.

According to Shafie, the problem with marine pollution estimated to cost RM4 trillion (US$1 trillion) and the majority of oil pollution was caused by operational discharges from oil tanks and cargo area cleaning.

“Commercial shipping operators are required under international law to dispose of pollutants in a strictly environmentally friendly manner. Bilge contents can include large quantities of oil, sewage and a whole range of other toxic contaminants. Cleaning of these tanks represents up to 10% of the ship’s operational costs. Therefore, there is a significant incentive to undertake illegal dumping whilst at sea,” said the Chief Minister.

“Some of the potential impacts of bilge pollution in Malaysia consist of serious harm to marine life, toxins passed into the food chain, and damage to environmentally sensitive areas (such as mangroves).

“We look forward to this collaboration between KASI, EASOS and B’smart that will bring together all the technologies mentioned into a dedicated, secure monitoring centre. I was informed that the BCMC will allow for monitoring around the clock to allow early detection and coordination of response to incidents, that will assist the State Government of Sabah with its rapid response teams being deployed within minutes of an incident being detected.

“The Borneo Centralised Monitoring Centre will allow us to fulfil our mission to amplify the state’s ability to monitor, detect and enforce in the marine and forestry domains and thereby enable the state of Sabah to address these challenges,” he added.

Kasi, a 1979 established firm with offices set in Sabah, Sarawak, Labuan and Kuala Lumpur by founder Master Mariner Datuk Captain Walter Nair, Earth and Sea Observation System (EASOS), a platform designed to provide high value decision support to tackle country-specific environmental, security and human challenges through intelligent fusion of data from terrestrial and satellite sources, and BSMART, an 1999 company with the visionary guideline to introduce innovative and revolutionary mobility solutions that includes world-class telematic end-to-end solutions that empower both individual and businesses, collaborated to bring the BCMC for the first time in Sabah.

The BCMC is a milestone for the development of Internet-of-Things (IOT) industry in Sabah, which is estimated to expand into Sarawak too.

Captain Walter, Izaney Azizan from EASOS and Abdul Rahman from B’SMART were also present at the launching ceremony.