Tuesday, November 24
You are at:Home»News»Nation»PD by-election sees seven-cornered fight after one aspirant rejected 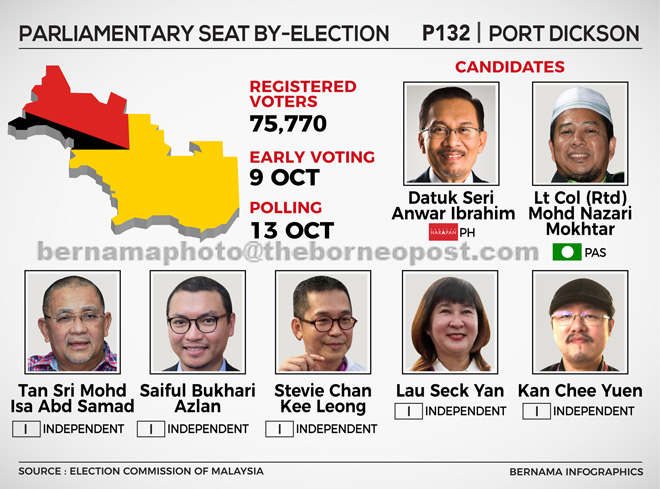 PORT DICKSON: The Port Dickson by-election is seeing a seven-cornered fight after one aspirant had his nomination rejected.

Returning Officer Khairy Maamor said eight candidates filed  their nomination forms but one did not qualify to contest.

The papers of the other independent candidate, A Rajendra, however, were rejected because his proposer is not a registered voter in the constituency.

Earlier, supporters of the candidates had gathered outside the Port Dickson Municipal Council Hall, which was chosen to be nomination centre, as early as 7am yesterday.

Besides  Mohd Isa and Saiful Bukhari who had announced their candidature at the last  minute,  Lau, Kan and Rajendra were “surprise packages”.

However, two other candidates who were expected to join the fray namely  Hisbah (an NGO) chairman Datuk Mohd Ezam Mohd Noor, a former senator, and Ahmad Kamaruddin of Parti Rakyat Malaysia were “no shows”.

Lau was the first candidate to arrive, at 8.20am, while Rajendra the last, showing up at 9.57am,  three minutes before closing time.

There was a slight commotion as Anwar was about to enter the gates to the nomination centre when the supporters accompanying him jostled to get in.

However, policemen on duty managed to control the situation.

During the nomination period, Lau was the first person to submit nomination papers,  at 9:02 am.

The Port Dickson by-election was called after its incumbent Datuk Danyal Balagopal Abdullah, 68,  from PKR, vacated the seat on Sept 12 to give way to Anwar who wants to make a comeback to the Dewan Rakyat.

In the 14th General Election on May 9, Danyal Balagopal won the seat with a comfortable majority of 17,710 votes, defeating Barisan Nasional’s  Datuk V S Mogan and Mahfuz Roslan of PAS.

The by-election will involve 1, 403 election workers with 39 premises to be used as polling centres involving 171 voting streams. — Bernama