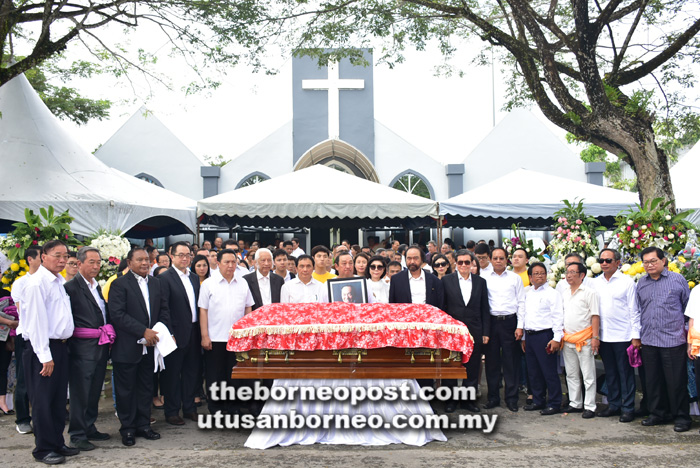 Family members, relatives and close friends in a photo call prior to the funeral procession.

The ceremony commenced with the paying of last-respects at the chapel hall by family members, relatives and close friends, some of whom travelled from overseas to be here.

It was followed by a church service by Rev Brother Anthony Tang and eulogies from Burhan’s family members.

The late Burhan was the founder of Indonesia’s Djanjanti Group whose philanthropy touched the hearts of many around the world.

Hailing from Minqing County in Fujian Province, China, he emerged from his humble beginnings to become a successful businessman who gave back generously to society.

Burhan started his early years working as a rubber tapper in Indonesia before rising to become a timber tycoon and later diversifying into other businesses. He takes upon himself to build a bridge of cooperation and friendship between China and Malaysia, and was the honorary permanent chairman of Sarawak Liing Hung Wong Clan Association as well as honorary permanent advisor of Chiang Hsia Huang Clan Association.

In 1992, he contributed RM1.5 million for the construction of Sarawak Liing Hung Wong Clan Association’s building which was officially commissioned a year later.

Earlier in 1982, he contributed RM200,000 to set up an education fund to help students in Sibu further their education, with the interest earned still being used to provide study incentives.