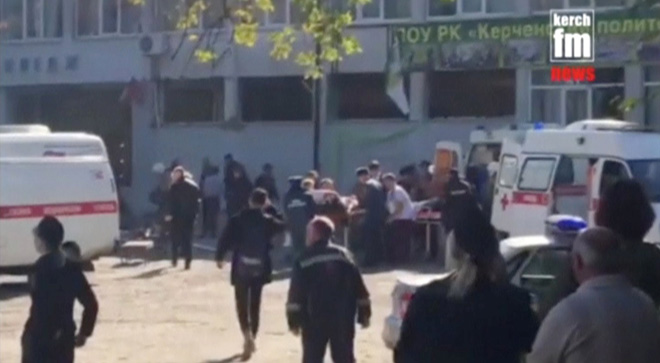 Emergency services carry an injured victim of a blast at a college in the port city of Kerch, Crimea in this still image taken from a video. — Reuters photo

MOSCOW: Thirteen people were killed and 50 more wounded on Wednesday, most of them teenagers, after a blast tore into a college canteen in Russian-annexed Crimea in what Moscow called a “terrorist” attack.

Russia’s Investigative Committee, which probes major incidents, said it had “opened a criminal case into a terrorist attack” after an “unidentified explosive device” went off in the polytechnical college in Kerch city.

A committee spokeswoman said the death toll had risen to 13 after initial reports 10 people were killed in the explosion that detonated at around 12 noon (0900 GMT).

Investigators said the explosive device went off in the college’s canteen and that it was “packed with metal objects.”

The “most of the (victims) are teenagers,” the committee said. The college’s website says it accepts students in the last three grades of school, from the age of 14.

An unnamed witness who worked nearby said in a video on Kerch.tv website victims “were taken away in public transport, in minibuses and buses, with 2 or 3 people in each ambulance.”

“They are children and staff,” the witness said. “I saw people without legs, without arms.”

Kremlin spokesman Dmitry Peskov said President Vladimir Putin had been informed of the “tragic news” from Kerch and that he “expresses deep condolences to those who lost relatives and loved ones.”

Crimean leader Sergei Aksyonov said on Facebook he had gone to the scene and “all the necessary services are working at the scene of the incident.”

The emergency services ministry said that it had flown out three helicopters and a plane with rescuers.

Kerch is linked to the Russian mainland by a bridge opened by Putin in May this year. — AFP