Sunday, May 22
You are at:Home»Sports»Shellito true to Chelsea roots as he passes away in Sabah 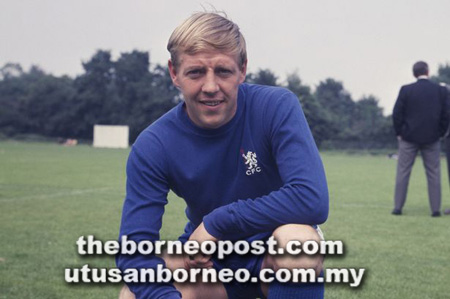 The last days of Chelsea legend Ken Shellito were spent in a public hospital in the Malaysian state of Sabah, surrounded by friends and family. Even though he found it difficult to speak, due to a lung infection, he perked up when asked about the biggest victory from his Stamford Bridge days.

“13-0,” he whispered, with what looked like a twinkle in his eye. He was too weak to give any more details, and would pass away just three days later at home, aged 78.

Sure enough, Chelsea’s record win was a 13-0 victory over Luxembourg part-timers Jeunesse Hautcharage in a UEFA Cup Winners’ Cup second-leg tie in September 1971, when Peter Osgood scored five. Shellito had retired by that point, but remained an intrinsic part of the club, as youth team coach and manager.

He would discover and develop some of the Blues’ greatest players including Clive Walker and Ray Wilkins, with the latter playing for England 84 times and appearing in two World Cups. And he’d become first team boss — preceding the likes of Claudio Ranieri, Jose Mourinho and Carlo Ancelotti — for more than a year across the 1977-78 and 1978-79 seasons.

Shellito’s love of Chelsea stayed with him long after his move to Malaysia via Singapore and the United States in the 1990s to further his coaching career (he would manage Kuala Lumpur, Perak and Sabah in the Malaysian top flight). And the fact that he could still recite club stats from his death bed reflects the depth of his affections. His house, with the stunning view of Kota Kinabalu, was called Chelsea Hill, and it hosted his funeral, with an open casket, on November 3rd.

My first meeting with Ken came a decade ago at AFC House — the headquarters of the Asian Football Federation in Kuala Lumpur — where he worked as a technical analyst. In a small room, he would scrutinise video replays of hundreds of Asian matches and write down his insights. I was visiting to interview then-AFC President Mohamed bin Hammam and was intrigued by the silver-haired man from England.

We would become friends when I moved to Kuala Lumpur in 2009 to host football for Pay-TV operator Astro. Ken appeared as a studio guest for our coverage of the 2009 Confederations Cup before introducing me to Sabah-based Scott Ollerenshaw, a former Australia international who would become a regular Astro pundit and good friend.

Ken’s stories were always entertaining, and gave me a taste of the Swinging Sixties in west London. Ken was born in 1940, a few months before Beatles Ringo Starr and John Lennon, and was signed by Chelsea as a 14-year-old on the same day as iconic England striker Jimmy Greaves. His prime was, arguably, when the Fab Four toured America for the first time in early 1964.

He was born in East Ham, a short walk from Upton Park, the home of West Ham United. But there was never any doubt about Ken’s devotion to the blue side of the capital city, playing in the 1958 FA Youth Cup final, and making his Chelsea first-team debut the following season. It was just before his 19th birthday.

His career really took off after future Manchester United boss Tommy Docherty became manager in 1962 when Chelsea were in the English second-tier.

Scotsman Docherty developed a brand of attacking football, borrowed from a visit to Spain, that saw Shellito and left-sided Eddie McCreadie employed as flying full-backs, given a licence to bomb forward. The system worked and the athletic Shellito helped Chelsea earn promotion in the 1962-63 season.

In May 1963, Shellito was rewarded with his England debut against Czechoslovakia in what was Bobby Moore’s first match as skipper. But five months later, he suffered a serious knee injury in a home game against Sheffield Wednesday. He was due to earn his second cap for England the following Wednesday.

After a series of operations, Shellito battled his way back into the Chelsea first team, but was never the same player. Retiring midway through the 1965-66 season after 123 league appearances, he missed the 1966 World Cup, with Fulham’s George Cohen taking his right-back spot as Moore’s England swept to victory on home soil.

Shellito remained close friends with members of the 1966 World Cup-winning squad, including Bobby Charlton, Gordon Banks and Jimmy Greaves. And he’d make a point of regularly returning to the UK for the Chelsea reunions.

Heading the Chelsea FC Soccer School in Sabah, he would marvel at the success of the club over the past decade and a half under the ownership of Russia’s Roman Abramovich, while lamenting that his beloved sport had lost much of its joy in a commercially focused era.

Ken’s personal joy in recent years was his six-year-old daughter Kenya. Although he had grown-up children from his first marriage in England, Ken delighted in being a father all over again in his seventies, with his Malaysian wife Jeany.

Anyone who knew him will remember Ken’s hearty laugh and infectious sense of humour, his passion for youth development, and his unabashed devotion to the Blues. He was proud of being one of only a handful of men to have played for Chelsea, managed Chelsea, and wore the colours of the Three Lions. And, yet, he was adamant that his move to Southeast Asia a quarter of a century ago was one of the best decisions he ever made.

– ‘Climbing the Chelsea Hill’, Ken Shellito’s biography as narrated to Nick Atkinson, will be released by MPH in 2019.