Tuesday, July 5
You are at:Home»News»Sabah»Litter-free Sabah programme launched in Semporna 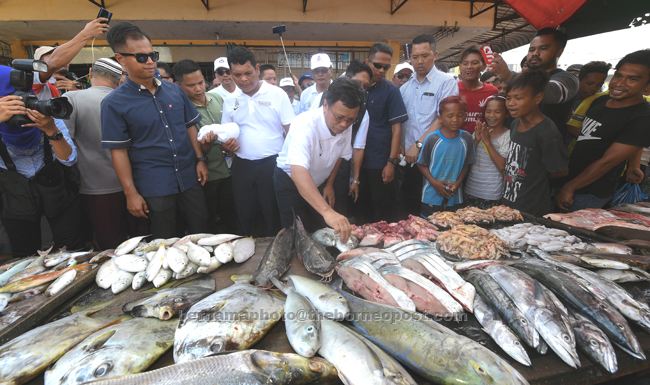 SEMPORNA: The Sabah government has given serious attention to the level of cleanliness in all districts in the state with the launch of the Litter-Free Sabah programme yesterday.

Officiated by Chief Minister Datuk Seri Mohd Shafie Apdal, Semporna was selected as the pioneer district to implement the programme due to Mohd Shafie’s dissatisfaction with the district’s level of cleanliness.

“At the moment, we can see rubbish everywhere, either on land or in the sea, and it’s the responsibility of the local population to address the cleanliness level in the district,” he said in his speech.

“As a district blessed with beautiful nature and marine tourism attractions, the communities in Semporna must play their role to stop throwing rubbish everywhere including in their own villages.

“I want Semporna to be known as a famous destination with many tourism attractions and not as a dirty district,” he said, adding that the programme would be extended to other districts to ensure the cleanliness level did not pose negative effects on the tourism sector.

He also wanted the Semporna district council to be restructured and to put cleanliness on its key performance index that would be monitored by district officer Blanus Kontong.

In a related development, Mohd Shafie Apdal wanted the contractors in charge of cleaning services in all district councils in the state to be reviewed.

The study needed to be carried out to see whether the contractors that were appointed by previous government delivered their jobs as stipulated in the agreement, he said.

He said in a New Malaysia, services were created not for the interest of contractors or any political entity, rather they were to safeguard the people’s wellbeing.

“It’s about time for us to make some changes including to provide the best in health services and education,” he said this to reporters after visiting Semporna Hospital yesterday.

He admitted that the state government was aware that hospital’s facilities such as medicines needed urgent attention.

For example, he said Semporna Hospital was not only experiencing shortage in expertise and medicines but also in terms of equipment.

“This is one of the reasons why we create the state Health and People’s Wellbeing Ministry to focus on the healthcare of the rural areas and the poor so that they will receive due attention from the government,” he said.

Meanwhile, Mohd Shafie said the restructuring of the Sabah Water Department (JANS) had brought positive results in terms of the revenue collection.

Within two months after the move, including the appointment of a new director, the department had collected RM72 million in revenue, he said, adding that the increase in revenue would ensure that the water supply could be improved as well. — Bernama

Previous ArticleHuawei’s new wearable offers new tracking and coaching features
Next Article Over 36,000 in Sarawak to sit for SPM exams this year