Tuesday, May 17
You are at:Home»News»Sarawak»Express boat at Sibu Terminal catches fire 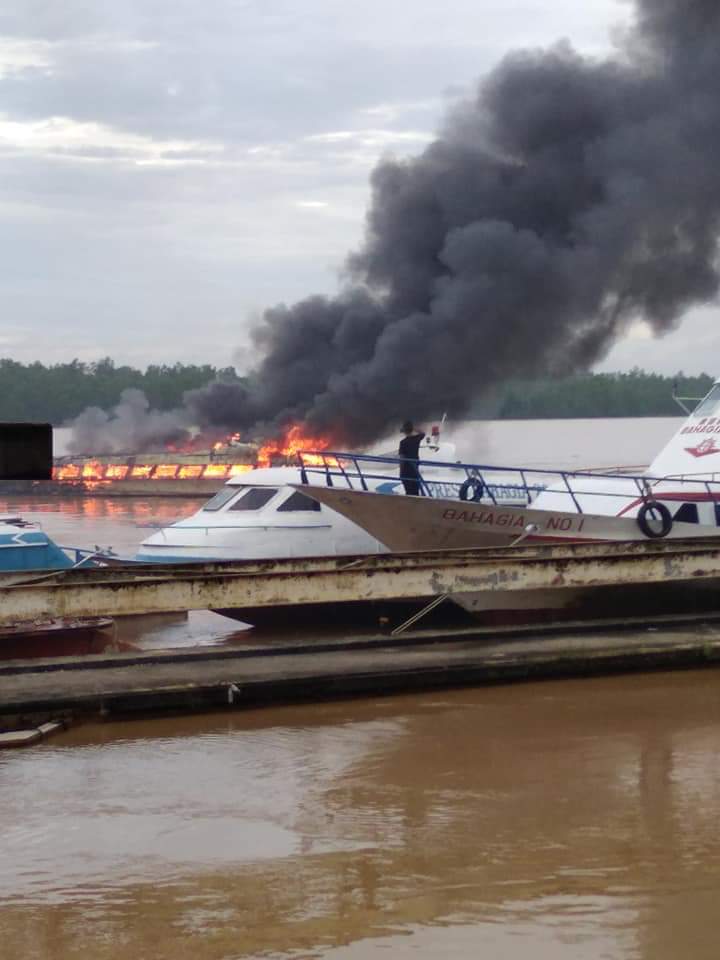 A photo from the Facebook showing the express boat on fire at the pontoon near Sibu Express Boat Terminal. – Facebook (Tandy Sakira)

SIBU: An express boat, Jaya Express, berthed at a pontoon upstream from the Sibu Express Boat Terminal has caught fire at around 6.40am this morning.

Another express boat alongside the razed Jaya Express was also slightly affected by the fire, but no casualties were reported as the boats were not operational at the time of incident.

Sarawak Rivers Board (SRB) Sibu assistant controller (Region II) Hatta Morshidi said quick action by the boat owner to tow the gutted boat away had prevent the fire from further spreading to other boats berthed there.

He added that this was the first time such an incident has occurred at the terminal here.

“Based on the preliminary report from our enforcement, the fire broke out at the pontoon near Sibu Express Boat Terminal around 6.40am (today). SRB immediately alerted the boat owner to quickly tow away the gutted boat to prevent fire from spreading to other vessels berthed there.

“Based on our observation – the one towed away is 100 per cent damaged but it is still floating. However, everything inside was razed such as seats and all that.

“The other vessel berthed next to the gutted boat was also slightly affected but the damage is confined to about 10 per cent.

“The boats were not operational at the time of incident – they are just mooring there – they are not carrying passengers,” he told The Borneo Post when contacted.

Hatta Morshidi, who was at the site to check the situation, said the affected boats are now berthed at Burung Apu Wharf in Khoo Peng Loong Road here.

Adding on, he said the board did not know what caused the fire.

“But we have already contacted the relevant authority such as the Fire and Rescue Department (Bomba) and police to investigate together with SRB,” he disclosed.

Meanwhile, based on the State Bomba operation center’s report, the Sibu Fire Station received a distress call at 6.40am

A team, comprised nine firemen were immediately deployed to the scene, headed by the station chief Melvin Amuk.

According to the report, the firemen were only on standby at the terminal for any eventuality and that there was no casualty reported.

The case is currently under investigation. The operation ended at 7.13am.