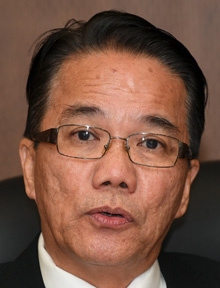 He said the Petroleum Development Act 1974, for instance, needs to be reviewed and amended to enable the state government to have greater control in managing its own resources.

“This is in line with the wishes of the Pakatan Harapan (PH) government and Warisan to restore the status of Sabah as an equal partner (with the Peninsula and Sarawak) as announced by Prime Minister Tun Dr Mahathir Mohamad on the eve of Malaysia Day on Sept 16, 2018,” said Liew at a dinner in conjunction with the dialogue on legislation with MPs and state assemblymen, which was also attended by Sabah Chief Minister Datuk Seri Mohd Shafie Apdal.

On the need for legal amendments to make it easier for entrepreneurs to conduct business in line with the aspirations of the “business-friendly” PH government, Liew said there is a need to review outdated laws created during the British colonial era, and cited the Licensing Ordinance 1948 and the Merchant Shipping Ordinance 1952.

“As such, the federal government will form a special task force in collaboration with the state government to improve business in the Peninsula and Sabah,” he said.