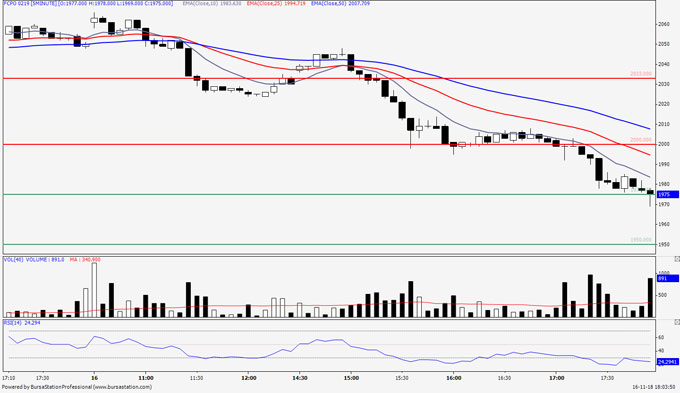 The Malaysia palm oil futures (FCPO) failed to maintain the rally from the previous session and was battered by nearly four per cent for eigh sessions, due to rising inventories and production as well as weak demand from key buyers.

However, there was a 0.91 per cent decrease to 248,898 contracts from 246,661 contracts in the daily average open interest from the previous week.

Societe Generale de Surveillance (SGS) reported a surge of one per cent for exports of Malaysian palm oil products during November 1 to 15 to 557,781 tonnes from 522,076 tonnes shipped during October 1 to 15.

Palm oil output was down three per cent to 1.57 million tonnes, down from the previous expectations of eight per cent growth.

Demand will also not likely rise from key buyers such as Europe and China as palm oil solidifies in the winter season.

In addition, India’s palm oil imports are also expected to remain weak as a crunch of liquidity and sufficient supply of rival oilseeds weighed on the price.

Thus, the bears are still in control of the palm oil price and market’s consensus for palm oil are expected to last until January 2019.

With that in mind, investors will most likely expect Malaysia’s palm oil to trade lower in the coming months.

Furthermore, industry analyst Dorab Mistry at an industry conference held in China commented that Malaysia’s palm oil inventories at end-December are expected to rise to 3.5 million tonnes, a revision from the previous forecast between three million and 3.3 million tonnes.

He also commented the same regarding inventories level in Indonesia, which will likely rise in the coming months.

Oil prices moved higher on Friday, recovering for a third straight session from a sharp weekly decline, boosted by the hope for a production cut from the Organisation of the Petroleum Exporting Countries (OPEC) with Russia and other allies.

Even with the three consecutive gains, both West Texas Intermediate (WTI) and Brent Crude Oil were still within losses of nearly five and four per cent, respectively.

Palm oil prices are affected by movements of other edible oils as they compete for a share in the global vegetable oil market.

From the hourly chart, Malaysia’s palm oil price remained in bearish sentiment and will likely remain bearish for the coming months.

There is no sign of a rebound in the near future as the price is still below the death-cross of EMA25 and EMA50.

RSI also showed that the price is in a bearish zone and may head to an oversold zone which is below 10.

In the coming week, FCPO might continue to trade lower. If FCPO fails to break below the first support level, it may trade towards the first resistance level.

AmSpec and SGS reports will be released on November 20, 2018 (Tuesday).