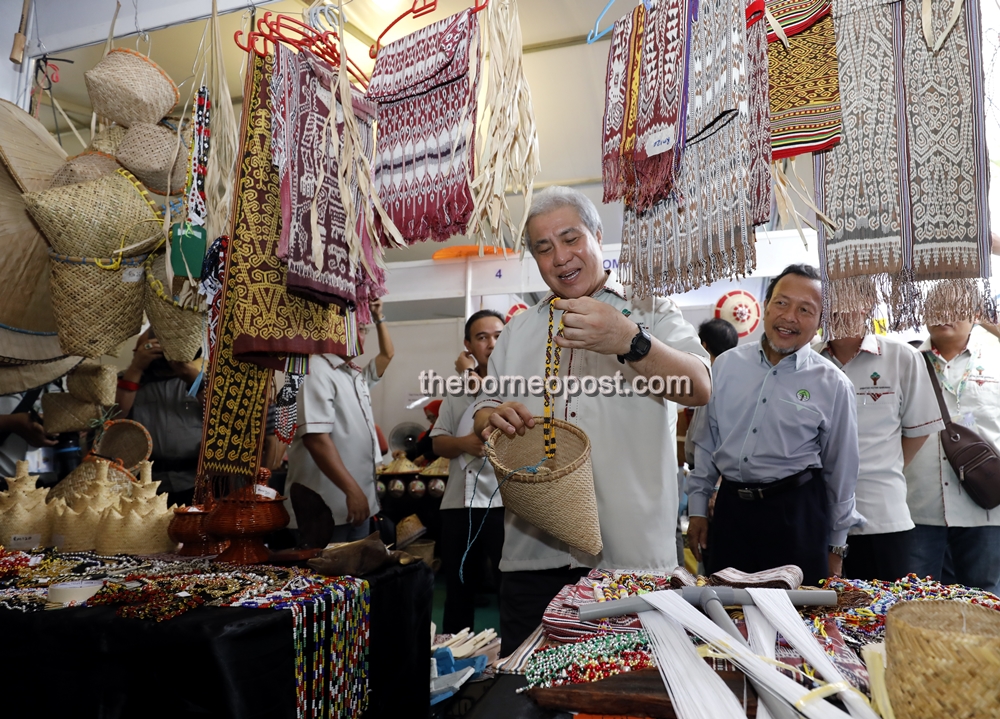 Awang Tengah takes a closer look at some handicraft items. – Photo by Chimon Upon

Without disclosing much details, he said one of the ways is through eco-tourism.

“Several initiatives have been implemented to see to it that Sarawak’s forests are properly managed while programmes on conservation of forests and wildlife are to carry on.

“The local community is urged to be involved in relevant activities such as home stay programme, preparation of local delicacies and cultural performance to promote eco-tourism,” he said when opening the Non-Timber Forest Products (NTFP) Sarawak 2018 Carnival at the Kuching Waterfront here today.

His text of speech was read out by Deputy Chief Minister and Minister of Industrial and Entrepreneur Development Datuk Amar Awang Tengah Ali Hasan.

He asserted that such concerted effort can help create awareness among the rural community of the potential of NTFP.

“Relevant agencies should through their respective programmes help the local community develop and enhance their skills towards promoting NTFP.”

He believed that carnival like this can serve as a vital platform to promote NTFP so as to enhance collaboration among the government agencies, the private sector and the local community particularly the rural folk.

To preserve Sarawak’s forests, Abang Johari said the state government is committed to achieving its target of seeing at least one million hectares of Totally Protected Areas (TPAs) by the year 2020.

The Sarawak government, he said, is also committed to implementing the initiative of Heart of Borneo (HoB) covering an area of 2.7 million hectares in line with the conservation of forest resources.

On top of that, Abang Johari said his administration will continue to go all-out to curb illegal activities that would put the state’s timber resources at stake.

“We need the cooperation of all to look after our forests. The local community needs to tip off the authorities whenever they come across any illegal activities especially illegal logging.

“The Sarawak state government has also decided not to issue any more new timber licences except for areas where development is required, such as the development of NCR (native customary rights) land,” he added.

Abang Johari pointed out that the State Budget 2019 he tabled last week had set aside over RM9 billion for development.

Of the figure, he said some RM6 billion or 67 per cent would be meant for rural development in terms of the upgrading of infrastructure such as roads, bridges as well as the supply of electricity and water.

This, he said, is to enhance accessibility for the rural folk so as to enable them to market their products outside Sarawak.

He added that the Sarawak government will increase ‘coverage’ of telecommunication services in rural areas to promote NTFP through e-commerce.