Wednesday, May 12
You are at:Home»News»Sarawak»Fight for the fund, Baru told 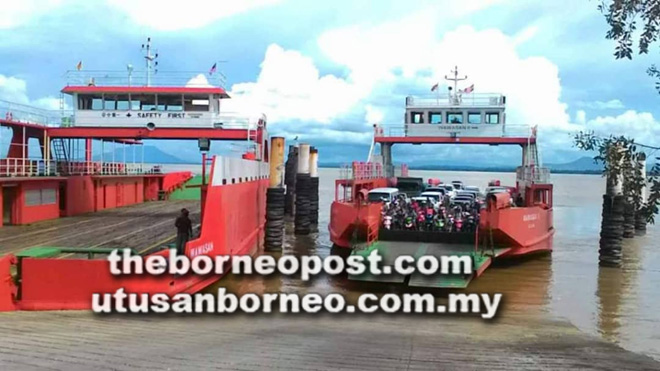 The ferries at the Batang Lupar crossing which take up to 45 minutes to cross the widest river mouth in Sarawak. The crossing can be dangerous during bad weather and the roads leading to the landing points on both sides of the river would be jammed with the queues stretching more than kilometre long during festive seasons. — File Photo from RTM facebook

However, Baru announced the shelving of the three bridge projects during his visit to Mukah recently citing the federal government’s lack of fund as the reason even though Abang Johari had
earlier included the construction of these bridges in the 2019 State Budget of RM11.9 billion, the highest budget in Sarawak’s history.

Assistant Minister of Coastal Road Datuk Julaihi Narawi in responding to Baru’s announcement said even though the projects will now proceed under the 2019 State Budget using state’s funds, Baru being a Sarawakian should understand better the need for federal government to chip in to assist the state government’s efforts to provide better road connectivity to the people.

“It is sad to hear a Sarawak born Works Minister not appreciating the effort of Gabungan Parti Sarawak (GPS) government under the leadership of Datuk Patinggi Abang Johari Tun Openg, which has decided to proceed with the implementation of Rambungan, Batang Lupar and Igan bridges even though the Pakatan Harapan new federal government has written to us to postpone the construction of the bridges.

“The GPS government fully understands the importance of the three bridges in the completion of the connectivity along the coastal belt of Sarawak. The coastal folk of Sarawak fully deserve the much   awaited completion of the coastal road in order to open up the whole area in an effort to uplift their socio economy status, better mobility and connectivity and integrate the overall development of the rural/coastal area with the mainstream development of the state,” he told The Borneo Post yesterday.

According to Julaihi, Baru as Sarawakian-born Works Minister should be talking about federal government reimbursing the funds even if Sarawak were to use its own funds especially on Batang Lupar bridge which costs RM1 billion to build.

“Don’t tell us Sarawakians he has no heart to fight for the cause and needs of rural Sarawak, and that he does not even know that GPS government is giving priority to develop the rural areas of Sarawak be it in the coastal or interior,” he said.

He also pointed out the 2019 State Budget clearly showed the state government’s seriousness to develop and proceed with rural coastal infrastructures including bridges along the coastal areas of Sarawak even though such projects are not given priority by Federal PH government.

“I hope YB Baru Bian would be more supportive for the need of Sarawak development,” he said.

Julaihi, who is also Parti Pesaka Bumiputera Bersatu (PBB) vice president, said the GPS government will continue to focus on rural and coastal development as the main agenda to push for further development throughout Sarawak.

He added this should be fully supported not only by GPS elected representatives but also those from PH and all Sarawakians regardless of their political standings.

“Otherwise PH YBs (elected representatives) and Ministers from Sarawak at the federal level would be seen as not fighting for Sarawak, and a mere bystander in federal government and not considered seriously by their federal bosses,” he said.

Baru, during his recent visit to Mukah, had said that the construction of the three bridges had to be postponed due to financial difficulties and that this was conveyed to the state government following a dialogue.

He was also quoted as saying that the three projects will be included in a review list once the country’s financial situation improves.