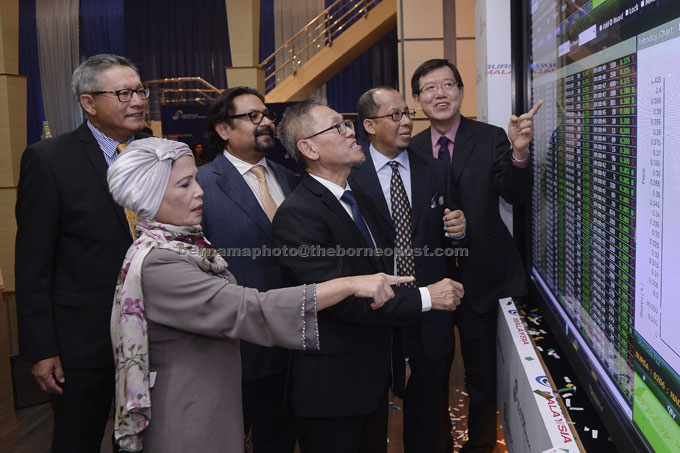 Muhamad Fuad (fourth left), Wan Azman (second right) and other directors from Gagasan Nadi looking on at the stock performance display after the group’s listing on the Main Market of Bursa Malaysia yesterday. — Bernama photo

Group managing director Wan Azman Wan Kamal said under the 11th Malaysia Plan, about 200,000 units of affordable homes would be built by 2020 due to high demand.

“We believe the affordable housing sector will still remain bullish for years to come, and probably we will secure a few more relevant projects in the future,” he told a press conference after the company made its maiden trading on Bursa Malaysia’s Ace Market yesterday.

The construction and facilities management services provider registered an encouraging debut on the Ace Market yesterday at 39 sen, up nine sen or 30 per cent from its issue price of 30 sen.

It had an oversubscription rate of 20.2 times during balloting and saw 8.95 million shares changing hands at the opening bell.

Yesterday, the company announced that it had bagged an RM109.99 million contract to build a public residential development in Putrajaya.

Wan Azman said currently, Gagasan Nadi will mainly focus on affordable housing projects, but is not discounting the possibility of participating in other government tenders such as hospital and army camps, should there be any.

However, he stressed that the company would give priority to the government-linked companies’ projects rather than private jobs due to payment assurance concerns.

“We will be very selective in taking up the private jobs, and we will study the companies’ payment or track record first before participating in the jobs,” he added.

He said currently, the company’s order book, which stands at more than RM700 million, is expected to sustain until 2022.

Wan Azman revealed that the company has 46.94 hectares of residential land in Ulu Yam and 0.20 hectare of commercial land in Chow Kit.

“The land is just for investment purpose, and we are not aggressively collecting our landbank, unless it is really good,” he added.

He said Gagasan Nadi, which specialises in design and build, has a track record of more than 20 years in securing over RM3 billion worth of projects nationwide.

“With the experience we have, coupled with the consultants that we are working with, it is an advantage for us to move forward,” he said.

Meanwhile, chairman Muhamad Fuad Abdullah said the company would continue to tender according to its capabilities and expertise in terms of its technical, financial and human resources, regardless of who is in the government. — Bernama