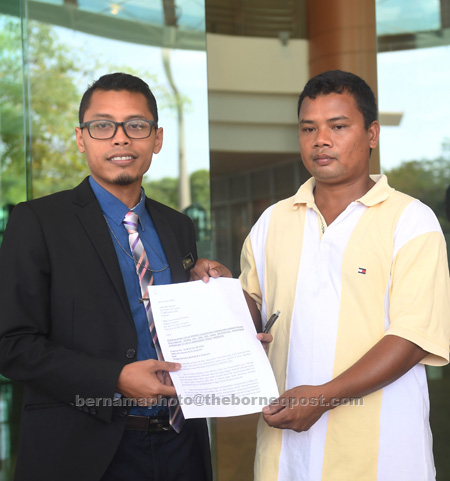 Jeffry (right) hands over the letter to Wasri in Putrajaya. — Bernama photo

PUTRAJAYA: The Action Committee on Orang Asli Customary Land and Territories has requested the government to review the construction of the Telom Hydroelectric Dam project in Pos Lanai in Kuala Lipis, Pahang.

Its chairman Jeffry Hassan said the government needs to look into the effects of the Tenaga Nasional Bhd’s (TNB) project on about 2,000 Orang Asli people, as well as the environmental impact on the 7,600 hectares of forest which has become their source of income.

“To date, no dam construction work has been carried out at Pos Lanai and we hope the government could provide answers on the construction that falls under the Cameron Highlands parliamentary constituency,” he said.

Earlier, Jeffry, together with Parti Sosialis Malaysia (PSM) secretary-general A Sivarajan submitted a letter of appeal to the Attorney-General’s Chambers, for a waiver of court costs of RM12,000 on the grounds that they fought for legal rights.

The letter was received by the chamber’s officer Wasri Ahmad Sujani.

Jeffry said on Aug 28 last year, they received a letter from the Attorney-General’s Chambers ordering them to pay the costs following a court ruling favouring TNB, the Orang Asli Development Department (JAKOA) and the Malaysian government.

“We cannot afford to pay the costs of RM12,000, or RM3,000 each for TNB, JAKOA, the government and the court. Although the cost seems small, it is very burdening,” he said.

Asked whether TNB offered compensation to the Orang Asli who have agreed with the construction of the Telom Dam, Jeffry said some of them were offered cash up to RM100,000 depending on the type of crop they cultivated.

“However, it was just lip service, without black and white. Due to that promise, more than 1,000 local residents have stated their consent to the dam construction, but we are against it as we think about the future and the ancestral land we inherited for so long,” he said. — Bernama