Friday, May 27
You are at:Home»World»Military help British police respond to Heathrow drone threat 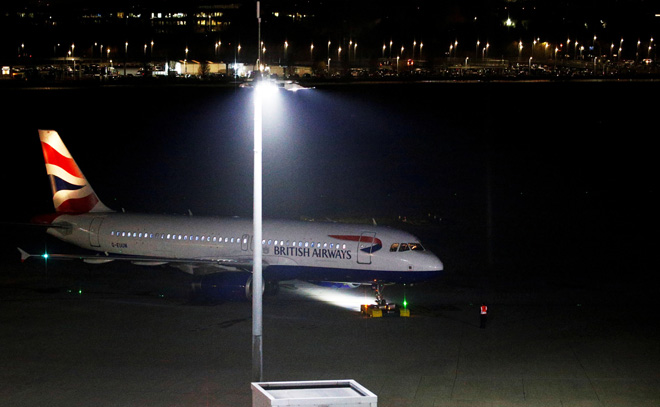 A British Airways aircraft sits on the tarmac at Heathrow Airport in London, Britain. — Reuters photo

LONDON: Britain’s armed forces were supporting police yesterday at London’s Heathrow Airport after a drone sighting led to the suspension of all departing flights for nearly an hour on Tuesday.

Defence Secretary Gavin Williamson said the military had been sent to Europe’s busiest airport at the request of police.

It follows a similar deployment at Gatwick Airport just three weeks ago after multiple drone sightings there caused three days of travel chaos.

“Last night, at the request of Metropolitan Police, our armed forces deployed to assist and support them,” he said in a statement yesterday.

“Our armed forces are always there when needed, ready to support the civilian authorities with our capabilities.”

Heathrow, which handles nearly 214,000 passengers daily, closed its northern runway after witnesses, including police officers, spotted a drone above the west London airport.

“We are carrying out extensive searches around the Heathrow area to identify any people who may be responsible for the operation of the drone,” he added.

The disruption caused by Tuesday’s incident appeared minimal, with Heathrow saying it was ‘operating normally’ on yesterday.

But it prompted fresh concerns in over British airports’ vulnerability to drones, coming so soon after the devices caused mayhem at Gatwick, Britain’s second biggest hub, before Christmas.

Multiple sightings at the
airfield south of the British capital between Dec 19 and 21 prompted the closure of its only runway, impacting tens of thousands of passengers booked on cancelled flights. — AFP

Cundy said officials had learned lessons from the incident which were helping to shape their current response at Heathrow.

“We are deploying significant resources — both in terms of officers and equipment — to monitor the airspace around Heathrow and to quickly detect and disrupt any illegal drone activity,” he said.

“Military assistance has been implemented to support us. However, we will not be discussing in any further detail the range of tactics available to us as this would only serve to potentially undermine their effectiveness,” he said.

The British government on Monday outlined plans in parliament for drone exclusion zones around airports to be extended from one kilometre to five kilometres, and for mandatory registration of operators.

Police will also be allowed to fine users up to £100 (112 euros, US$128) for failing to comply when instructed to land a drone, or not showing registration to operate a device. — AFP

Previous ArticleBN to field Orang Asli in Camerons by-election?
Next Article MPs debate Brexit deal after stinging setback for May