Wednesday, July 6
You are at:Home»News»Sarawak»Bearded boar ‘angpow’ packets a hit with visitors abroad 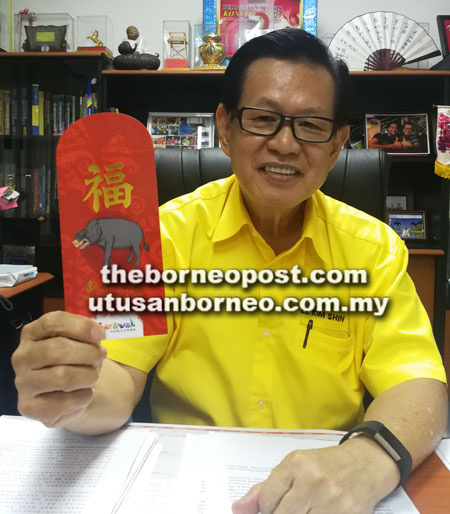 Lee shows the winning design of Borneon bearded boar during its promotion abroad and in the country.

Assistant Minister of Tourism, Arts and Culture Datuk Lee Kim Shin said the state tourism office and representatives were pleasantly surprised by the positive response in China, Hong Kong and Taiwan where the ‘angpow’ packets were introduced by STB there.

The bearded boar ‘angpow’ packets considered unique by those abroad were all snapped up in a short time.

“They have never seen this boar species from Sarawak before,“ he said.

Lee said there were plenty of enquiries and it was also featured in social media and TV2 news section when STB sent out these promotional ‘angpow’ packets last month.

Little is really known about the bearded boar species due to their elusive nature in the rainforest.

It is thought that they breed all year round and that mating begins when the forest dipterocarp and oak trees stop flowering.

They build large nests up to two metres across.

Alfred Russel Wallace made little mention of these animals in his late Victorian writings on ‘The Malay Archipelago’ but Robert Shelford (a former curator of Sarawak Museum) in his 1916 posthumously published book ‘A Naturalist in Borneo’ recorded three species of Bornean wild boar.