Tuesday, September 28
You are at:Home»News»Sarawakians held captive in Cambodia without trial 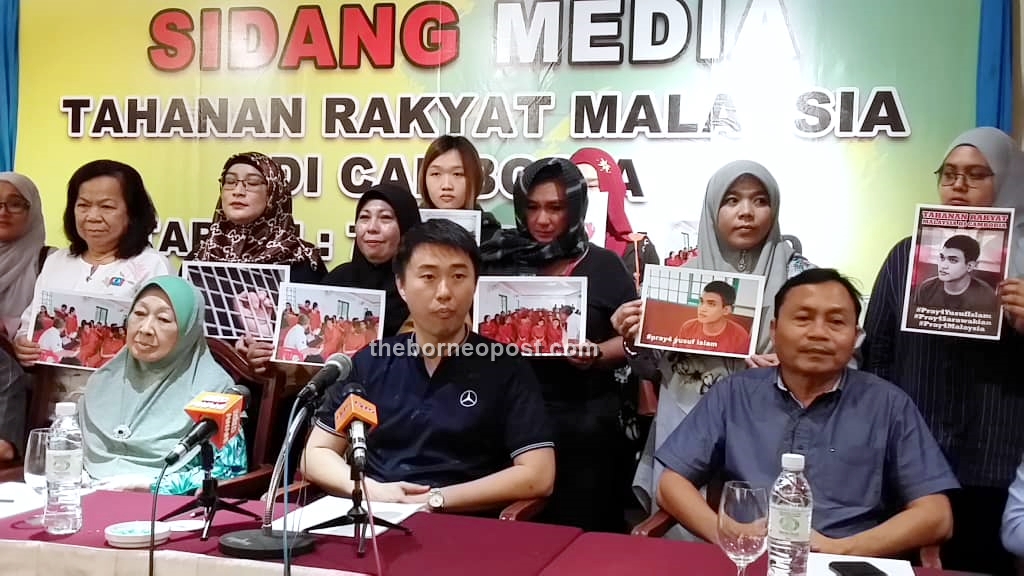 Sng (centre, seated) and others at the press conference.

KUCHING: Forty-seven Malaysians, 44 of whom Sarawakians, are presently being held in a Cambodian provincial jail without trial.

Their plight was highlighted by Julau MP Larry Sng, who said these victims, aged between 18 and 20, were promised high-paying jobs before they were brought to Cambodia last year.

“These 47 young Malaysians are from poor families who are victims of a human-trafficking scam and are being held in a Cambodian provincial jail without trial and without the Malaysian Embassy (in Cambodia) being informed.

“Most of them are young, aged around 18 to 20 years, and were promised high-paying jobs by scammers in exchange for a few hundred US dollars,” he told a press conference at a leading hotel here.

Sng said the 47 were held for a week in a lock-up and then transferred to a provincial jail 446km from the capital on Dec 16 last year.

He said some of the victim’s families had gone to Cambodia to find out where their children were.

He added that a check with the Malaysian Embassy in Cambodia did not reveal any information pertaining to the arrest and whereabouts of the 47 Malaysians.

“They have not been brought to a court of law to be charged or to be remanded. One of the parents found out their whereabouts.

“Shortly, a news item was published about them in the Cambodian local press. It seems that they can be held without being charged by the police for up to three years,” he said.

According to Sng, the 47 Malaysians “did not commit any offence in Cambodia”.

He said the Ministry of Foreign Affairs is aware of this issue and working on efforts to bring these young Malaysians home safe and sound.

“About a quarter of them are young girls. It is hoped that Wisma Putra (Ministry of Foreign Affairs) will provide assistance in dealing with this situation. Their safety is of paramount concern to their parents,” he added.

Sng believed that these young Malaysians had paid between US$100 and US$200 to a company which was responsible for bringing them to Cambodia.

He said he was clueless as to what sort of high-paying jobs those Malaysians were promised.

“We don’t have the specific details. But not all of them were brought there on the same plane. What we do know is that they were brought to Cambodia, kept in a house for a few weeks without jobs.

“And then the police there arrested them for online gaming. But we believe they are innocent even though we have limited information,” he explained.

He added that his priority was to secure the safety of the 47 Malaysians and bring them back home safely.

“We will let Wisma Putra deal with the government there (Cambodia). It’s G to G (government to government) now,” he said.

On the victims, he said officials of the Malaysian Embassy in Cambodia had visited them in the jail.

Asked why the Ministry of Foreign Affairs didn’t call for a conference on this matter, Sng said: “This is very recent. And we are calling for a press conference today to push for this agenda so that they can work on it as soon as possible.”