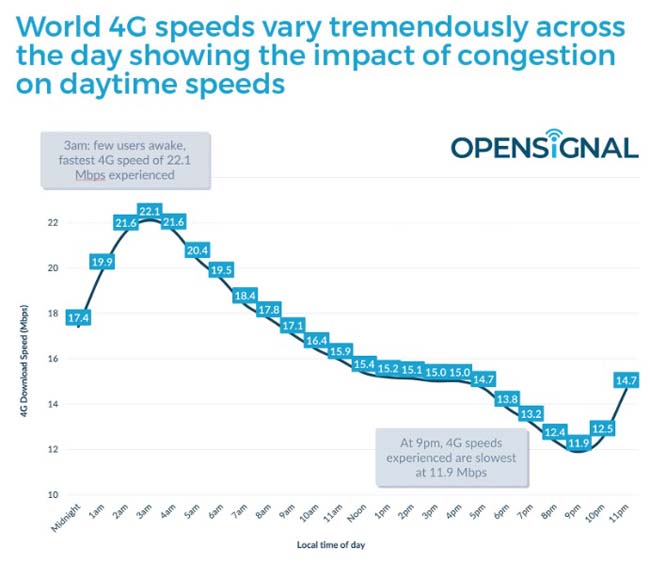 KUALA LUMPUR: The latest report from Opensignal, the independent global standard for analysing consumer mobile experience, shows that across 77 countries studied, 4G Download Speeds are between 31.2 Mbps and 5.8 Mbps faster at the best hour of day compared with the slowest hour of the day.

While some countries offered much more consistency in speed than others, every country had some degree of speed fluctuation throughout the day.

In terms of the best 4G speeds offered in each country Malaysia ranked 66th out of the 77 countries surveyed by OpenSignal. At an average of 21Mbps (during off peak periods) Malaysia was faster than the Philippines (19Mbps), Indonesia (18.5Mbps) and Thailand (11.7Mbps), but trailed behind Cambodia (23.1Mbps), Vietnam (26.4Mbps), Myanmar (32.7Mbps) and Singapore (54.7Mbps) in ASEAN. Overall South Korean users had the best experience at off peak times with an average 4G speed of 55.7Mbps.

The survey also showed that the Malaysian 4G experience shows extreme speed variability depending on the time of day. Speeds ranged from as little as 9Mbps, at Malaysia’s peak hour of 10pm, up to 21Mbps at off peak hours – between 1am to 3am.

“These big fluctuations in 4G Download Speeds are most likely caused by congestion on the network as the slowest speeds always occur when demand for mobile data is the highest.

“ The issue is exacerbated in urban areas. It’s clear that wild swings in speed are even more common at a city level than they are nationally.

“Cities often have the latest 4G technologies deployed and so should deliver the fastest speeds. During the day and evening, speeds drop dramatically, highlighting the failure of current 4G networks to deliver a consistent experience. In the case of Kuala Lumpur, speeds dropped as low as 8.6Mbps during the peak congested period, and as high as 21.4Mbps during off peak times,” it said.

To overcome this, it noted that the 5G network, while usually touted for its speed, it could provide a solid foundation of capacity that would iron out the wild fluctuations we see in 4G speeds today.