Tuesday, August 11
You are at:Home»Features»Legacy of success

For a second-year law student, success comes from having a positive attitude
and a strong desire to help change the lives of his peers for the better.

GROWING up, Nigel Lo often wondered what was the secret to success.

“I was diagnosed with Attention Deficit Hyperactivity Disorder (ADHD) when I was six and often had to struggle to cope in class. But I wanted to overcome my setback and was always seeking answers on how to succeed in life,” the 19-year-old law student recalled.

“Based on this, I recently found the answer to the question I’ve been asking myself all along – how to become what we think we can become.”

The former Lodge School student told thesundaypost his wish to become successful stemmed from a chain of events. 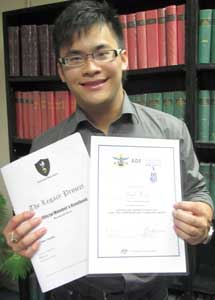 PROUD ACHIEVEMENT: Lo is the first Malaysian to win the Long Tan Leadership & Teamwork Award of the Australian Defence Force for his outstanding leadership and dedication in forming the Murdoch College Magis Society.

“When I was 15, I was invited to join my school’s Red Crescent Club. It was here I met one of the teachers, Margaret Loh, who really believed in my capabilities and gave me the opportunity to shine. For the first time in my life, I felt I had done something constructive.”

Through his participation in the club, he learned to communicate with his schoolmates and soon demonstrated leadership qualities which led to a three-year term as club president.

When he finished Form Five, he was at a point where all he wanted was pursuing a law degree, completing it and coming back to help his father at his law firm.

“I figured it was the only feasible option back then.”

Lo enrolled for foundation studies at Murdoch College in Perth where he met his principal, Mark Antulov, and Murdoch College executive director, Barry Gregory – two men who would become influential figures in his life.

“It was into the third week at college and I was still trying to adapt to the western culture. Then I met Mark and he started talking to me and encouraging me to start a club.

“At first, I wanted to start a Red Crescent club but because Mark didn’t have any experience in that, he suggested I start a club where I could teach something I was comfortable in,” he said, adding that his principal’s advice inspired him to aim high to achieve what he wanted in life.

Lo subsequently set up a club but first he had to go round the college to present his concept “despite having butterflies in my stomach.”

“I introduced myself, then informed my college-mates I was starting this club that would focus on teaching leadership skills and I encouraged them to join me.”

The club was formed in February 2010 with only 10 members but grew substantially a year later and became known as the Magis Society.

“It’s a students-run club that aims to get students to inspire and help one another excel in all areas of life,” Lo said, explaining that the word ‘magis’ meant ‘more’ in Latin.

According to him, the club gives students the opportunity to constantly search for more and learn from each other.

“The secret to life is to seek more in whatever you want.

“You must always want more and when you do, you will get it. When you become what you think about, you will have to seek more.

“If you want to change people’s lives, you have to seek the knowledge to do it. So for me, if I wanted to change the lives of my peers, I would need love, compassion, leadership and speaking skills that give me the power to inspire them.

“As long as we have goals and are determined to strive towards them, we will achieve them. Nothing will stop us,” he said.

Through the Magis Society, Lo co-wrote a book with fellow Malaysian Mohd Shahzan Shah called The Legacy Project, aimed at helping club members change their own lives and the lives of those around them.

“Shahzan and I found a lot of young people nowadays having a hard time finding their own identity which would eventually cause them to succumb to peer pressure,” he said.

“There are many who don’t know their purpose in life. They seek their identity but don’t know where to fit in.”

In this regard, Lo’s advice to his peers is to not conform.

“A lot of youths don’t stand firm on their beliefs because most of them don’t want to end up the laughing stock of their friends.”

He said instead of succumbing to peer pressure and following whatever their friends did, they should ask: “Why not stand firm on what we believe? Say this to ourselves: This is who we are. We weren’t born to please anyone. We were born so that we could live our lives the way we wanted.”

He believed when people did not conform, they were usually the ones who would be successful – and that’s what he wants to preach to young people.

The Legacy Project will help members identify their purpose in life through a series of questions teaching them to seek more from their identity and find their purpose.

“Through these questions, we will guide their thoughts to find the hidden values unique to them,” Lo said, adding that members were also taught to write portfolios of personal achievements and what they could do to change someone’s life.

“This project will teach you how to change your life and another person’s life – a person can change a lot of people’s lives through this project. The success of the people you change will thus become your legacy.”

For his effort and determination, Lo became the first Malaysian to win the Long Tan Leadership & Teamwork Award, an initiative of the Australian government in conjunction with the Australian Defence Force.

It’s awarded to students who demonstrate leadership and teamwork in the school and the broader local community.

The award, which also includes A$500, was for his outstanding dedication and leadership qualities in inspiring peer encouragement and learning through the formation of the Murdoch College Magis Society in Perth, Australia.

Today, the Magis Society has a global network of 145 members from countries including Australia, the US, Serbia, Singapore and Malaysia, just to name a few.

Lo, now in his second year at Murdoch University, revealed more activities were in store for Magis Society members.

“I’ll be drawing up a constructive programme to give members a path to follow.

“I want to see Magis Society become a society of high achievers, focusing on peer mentoring and helping young people to come out of their shell and step into the community to make a difference,” he said.