Monday, August 10
You are at:Home»News»Sarawak»Bolly installed as Archbishop 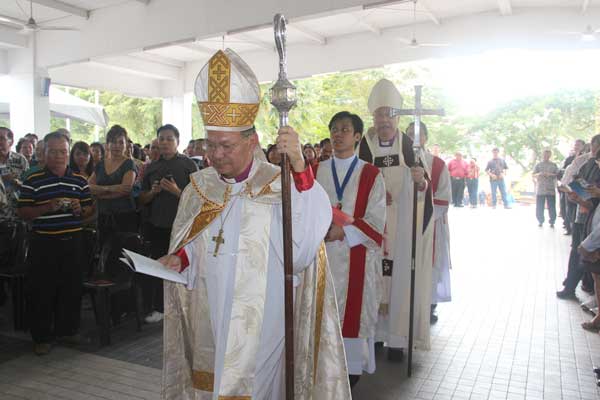 HISTORY IN THE MAKING: Bolly leads a procession prior to being installed Archbishop of the Province of the Anglican Church in South East Asia.

KUCHING: Bishop of the Diocese of Kuching the Most Reverend Datuk Bolly Lapok was officially installed as the fourth Archbishop of the Province of the Anglican Church in South East Asia at an elaborate ceremony in St Thomas’ Cathedral here yesterday.

Bolly, who is the first Sarawakian ever to hold the post, succeeds Bishop of Singapore the Most Reverend Dr John Chew.

With his installation as the Archbishop of the Province of the Anglican Church in South East Asia, Bolly becomes one of the 38 Primates in the worldwide Anglican communion.

The solemn ceremony was attended by over 2,000 Anglicans, including guests from England, Australia, Canada, the US, Japan, South Korea, Hong Kong, Taiwan, India and the Philippines.

During his sermon, Bolly said he felt unworthy of the celebrations which were arranged for his installation.

Humbled by his installation as an archbishop, he said his ministry in becoming a priest relied very much on the support of everyone.

“This occasion (the installation) is not about me but for the church of God,” he added.

As an archbishop, his task would be to oversee the province which is made up of the Diocese of Kuching (Sarawak and Brunei), Diocese of Sabah, Diocese of West Malaysia and the Diocese of Singapore, which also covers Cambodia, Indonesia, Laos, Nepal, Thailand, Myanmar and Vietnam.

Besides chairing the Association of Churches in Sarawak, Bolly also sits on the boards of the Sabah Theological Seminary, Seminari Theoloji Malaysia and Trinity Theological College Singapore. 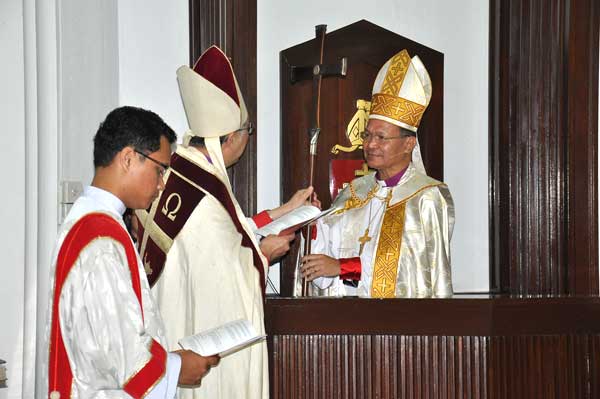 SOLEMN CEREMONY: Dr Chew (second left) hands over the crosier to Bolly at the installation ceremony.

Bolly graduated from the House of Epiphany in Kuching with a diploma in Theology in 1974. He was then ordained as a deacon and later priest in 1975 at St Luke’s Church in Sri Aman with special dispensation from the Archbishop of Canterbury as he was under the canonical age of 24.

From 1984 to 1985, he continued his studies at Westhill College in Birmingham, UK under a United Society for the Propagation of the Gospel (USPG) scholarship and majored in pastoral theology, ecumenism and English.

Bolly continued to study New Testament Greek and obtained a Licentiate in Theology from the Australian College of Theology in 1991, as well as a degree of Scholar in Theology.

In 2001, he received a Master of Arts with distinction in Missiology from the University of Birmingham.

After the ceremony, a community celebration dinner was held at Pullman Hotel.