Tuesday, May 18
You are at:Home»News»Sarawak»Body plans for wholesale market in Kuching 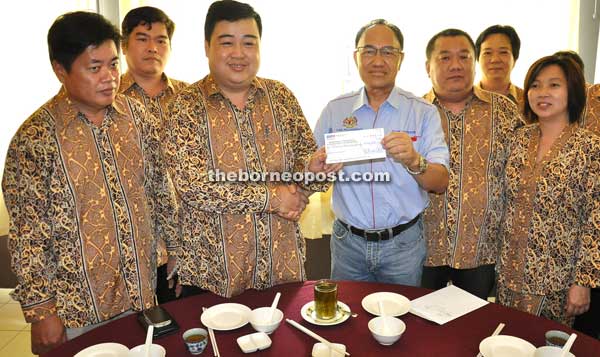 GRANT GIVEN: Dawos (fourth left) handing over a cheque amounting to RM20,000 to Lee (third left) to help the association fund its activities.

KUCHING: Members of the Wholesale and Distributors Association of Kuching and Samarahan will be organising an official trip to the wholesale market in Selayang, Selangor next month to conduct a study of the market there.

According to the association’s chairman Lee Pui Siong, after the completion of the study, the association would be coming out with a blueprint on the establishment of a vegetable wholesale market here to the state government. Lee said this during the handing over ceremony of a cheque amounting to RM20,000 by Deputy Minister of Tourism and also Mambong MP Datuk Dr James Dawos Mamit here yesterday.

Dawos had on the association’s Chinese New Year gathering at Siburan Community Hall on Jan 29 pledged the grant to help fund activities organised by the association for its members.

Lee stated that with the grant by Dawos, the association would be able to organise activities that would help its members.

“We have planned activities for our members and hope it would help our members better manage their business,” he said.

With the initiative taken by the association to encourage its members to be equipped with knowledge and experience, Lee hoped that the association’s plan to establish a wholesale market here would become a reality soon.

“Therefore, we hope for the support of our state government in granting us a piece of land for us to implement our plans,” Lee added.

Meanwhile, Dawos said the establishment of a wholesale market here would benefit both retailers and consumers.

“The state government is very supportive but they (the wholesalers) must have a permanent place to trade just like for instance in Selayang where there is a wholesale market.

“What we want is that the wholesalers will be there permanently so that when retailers run out of stock, they can go to the wholesale market and get their stock. This will ensure the people of Kuching will always have something to buy when they do their marketing,” he stated.

Dawos said that the establishment of a wholesale market would mean that there would be ample supply of vegetables thus help bring down prices for the benefit the consumers.

He stated he had introduced a piece of state land to the association but was made to understand that because the land was near to the airport, it was inappropriate to build a big building there.

“They are applying for another piece of land at the Samarahan district. I encouraged them to apply for the land and I hope that they will be successful. I will also help them to push for the approval for the land,” Dawos said.