Sunday, January 19
You are at:Home»News»Sarawak»Escape from the jaws of death 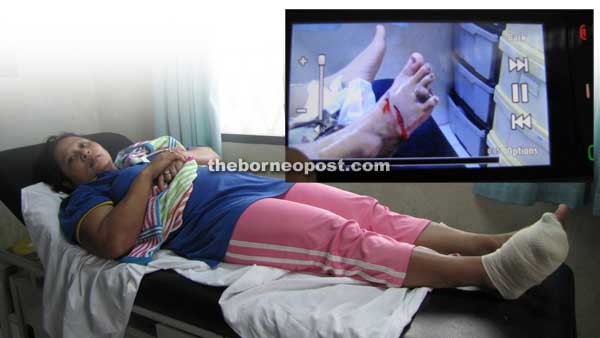 BATU NIAH: Housewife fights off ravenous croc losing a toe while knocking off one of its teeth in the process.

A housewife fought the battle of her life with a crocodile after it attacked her on a rickety jetty by the bank of the Niah River around 6.30am yesterday morning.

Millie Nush, 36, from Rumah Nor had been doing her laundry near a footpath leading to the Niah National Park for about half an hour when the 12-foot reptile suddenly struck and pulled her into the water.

She kicked frantically and somehow managed to free herself before scrambling back to shore.

“My wife fought and kept on kicking at the crocodile until it let go of its grip. We were surprised to find what seems to be a crocodile tooth embedded in her wounds,” said her husband Lad Labang.

Miraculously, Millie only suffered cuts to her right leg as well as a partially severed fourth toe.

Lad added that after its failed attack, the crocodile had twisted and splashed about in the river in a seemingly taunting manner before disappearing.

This latest incident was an eerie reminder of the fatal crocodile attack on a school boy in 2001 at a spot just 2km away.

Then a 15-foot female crocodile dubbed Dara Subis had grabbed 10-year-old Jaba Kana, who was bathing in the river.

A General Operations Force (GOF) sharpshooter managed to shoot it twice in the head about 22 hours after the heinous attack.

The victim’s severed arm and leg were later found in the crocodile’s stomach.