Tuesday, October 4
You are at:Home»News»Sarawak»Situation in the school normal and under control — Tamin assemblyman 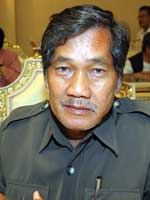 Sibu Resident Sim Kok Kee in stating this yesterday, said: “The Selangau district officer had given feedback to me that the situation there was under control although it was slightly chaotic as first. There was no stampede.”

“But there was nothing unusual about the happening yesterday (Thursday) as similar situations had also been seen at Sibu Town Square previously as some people might have got overly excited, triggering the rush,” Sim added.

He was referring to a national English Daily which quoted that a stampede nearly occurred at SJK (C) Tong Ah hall when BR1M vouchers were given out.

According to the report, there were jostling and shoving among the recipients in the process of trying to get the RM500 vouchers.

“The situation was under control and we are taking proactive steps to continuously improve the process, including the control mechanism to make it convenient for the people,” Sim said.

He went on to say they would be putting in more control measures to ensure better crowd control.

Sim also did not discount the possibility of them increasing the manpower to better keep the situation in check in future.

“Perhaps, like what we are doing in Sibu, we will enlist more Rela and police personnel to assist us in controlling the crowd in future,” he noted.

Meanwhile, the distribution of BR1M vouchers at the primary school in Selangau was up to the fourth batch as they had yet to receive any information on further batches, he revealed.

Tamin assemblyman Joseph Mauh clarified that the situation in the school was normal and under control.

“Initially, when the elderly, those aged about 60 and 70 were trying to leave their queue after collecting their vouchers, some of the younger ones moved forward and there was congestion.

“But this lasted only for a few minutes and everything returned to normal. Nobody fainted or fell down.

“This was a normal situation that can be seen elsewhere,” Mauh explained.

He thanked the authorities for maintaining the law and order during the disbursement of the cash aid and the people for being patient.

Towards this end, he urged those yet to get the assistance to be patient as the government was doing its level best to include everyone eligible for the aid.

“They can still appeal if they did not get the assistance. I hope the government can consider extending the appeal period so that those deserving rural folk (yet to get their aid) can get their RM500 cash assistance,” Mauh said.

Last December, pandemonium reigned at the office of the Inland Revenue Board (IRB) here when a mammoth crowd frantically pushed their ways through to submit their BR1M application forms.

It was believed that there was a miscommunication on the deadline for submission, prompting the people to force their way into the office as they feared missing out on the opportunity.

Then, there were those who wanted to obtain the application forms at the main entrance counters meant for submission of forms.

An officer was seen shouting through a megaphone to calm the huge crowd as tempers flared.

The officer had no choice but to raise his voice over the megaphone and warned people against pushing, fearing that this might spark off untoward incident.

Older folks were seen sandwiched among the crowd while babies and young children cried in the highly tensed ambience.