Wednesday, May 12
You are at:Home»Business»Cyberjaya selected as one of Japan’s FutureCities

CYBERJAYA: Cyberjaya, selected as one of Japan’s 2011 FutureCities, has been invited by the Japanese government to its international forum on the ‘FutureCity Initiative’ on February 21. 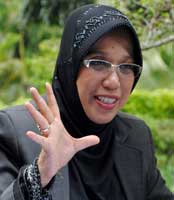 Other cities selected as ‘FutureCities’ that will be present to share their initiatives are Copenhagen (Denmark), Malmo (Sweden) and Surabaya (Indonesia).

The FutureCity Initiative is one of Japan’s national strategic projects, identified in its New Growth Strategy which was decided by the Japanese government in June 2010.

The purpose of the initiative is to resolve issues such as environment and aging societies in order to create cities that are home to human-centred values.

Based on the initiative, the Japanese government will select several cities as the first models of FutureCities in Japan and will seek information regarding leading practices in the field of sustainable city development in the world.

Cyberjaya will be represented by Pipah Mohd Nasir, General Manager, Business Development of Setia Haruman Sdn Bhd, the master developer of the city.

Pipah will share Cyberjaya’s current and future initiatives, success stories and challenges in realising its goal to become one of the world’s Green Cities.

“We are very honoured to be selected and as the city’s ambassador. I will share with the audience on Cyberjaya’s initiatives, success and challenges on Green Technology and its growth.

“By 2020, we aim to be Malaysia’s ICT Hub and Green Intergrated City,” Pipah told Bernama in an interview.

Cyberjaya, launched in May 1997, embarked on the green technology agenda in 2010 in sync with Malaysia Green Technology Policy which is built on four pillars, namely energy, economy, environment and social.

“For Cyberjaya, we have certain targets to fulfill the green technology agenda together with stakeholders including Sepang Municipal Council (Local Authority), Ministry of Energy, Green Technology and Water, Cyberview Sdn Bhd, Multimedia Development Corporation, as well as developers/investors and Cyberjaya communities.

“Firstly, we are targeting on green economy and green jobs.

Then, we will focus on green community to be followed by environment and human health,” Pipah said.

She added that Cyberjaya’s success in achieving the Green Building Index’s Gold certification for SHELL building in March 2011 reflected its seriousness in constructing Green Buildings.

The first Green Building in Cyberjaya was built by EMKAY Group, being the first group in Malaysia to undertake the challenge of constructing a LEED Gold building, with LEED being the internationally recognised certification system for sustainable buildings.

Pipah’s presentation will also reveal Cyberjaya’s green economy, which will create 20,000 green-related jobs and its aim to reduce green house gas emission by 33 per cent by 2020.

Her presentation will also cover Cyberjaya’s success in achieving its basic goal over the last 14 years and its plans to realise its overall targets by 2020.

Cyberjaya, which covers 7,000 acres in area, is a hot spot investment corridor.

It is divided into four different development categories which are residential, commercial, enterprise and institutional.

“These four components are very unique and no other kind of development in Malaysia has this,” she said.

Pipah also said that Cyberjaya, a city within Malaysia’s Multimedia Super Corridor, now has more than 35 multinational companies operating in the city. — Bernama