Saturday, October 24
You are at:Home»Business»Speed bumps ahead for Asia equity rally, time ripe for investors to lock in profits from Asian companies

SINGAPORE: Investors chasing surging stock prices of Asian companies that are most geared to global trade could be in for a reality check.

A flood of cash thanks to accomodative central banks, encouraging US economic data and a European lifeline for the region’s banking system have gotten global stock markets off to a roaring start to the year, with cheap money trumping risks to corporate earnings growth.

Money has first found its way into assets hardest hit by last year’s fears of an eurozone-led global meltdown.

Funds in particular had made a dash for Asian equities as riskier assets in emerging markets were once again in favour.

The MSCI Asia Pacific ex-Japan index was up more than 13 per cent so far this year, after tumbling 18 per cent in 2011.

Sub-indexes of cyclical sectors such as materials and technology were up more than 15 per cent, compared with an eight per cent gain for the S&P.

Still, analysts said it might now be time for investors to lock in profits from the recent gains in Asian materials, transport and microchip companies, which still suffer from weak underlying trends in their respective industries.

Fears that the US economy could fall into another ‘soft patch’ like last year and signs that Europe was sliding into recession were further reasons to take some money off the table.

‘We’re going to get some days when things look pretty good but it’s going to be dragged back down by the reality of a much tougher environment for companies to operate in,” said Winston Sammut, investment director, Maxim Asset Management.

Asian shipping stocks were a case in point. They had run up sharply in a move attributed to improved global manufacturing data and industry bellwethers such as Maersk raising freight rates.

But that enthusiasm contracted sharply with a bearish operating environment for shippers, with overcapacity and sluggish global trade now compounded by tighter bank financing for the debt-laden sector and rising fuel prices.

A similar story could be seen in Chinese steelmakers, which had rallied along with broader markets even though companies were facing cash shortages, shrinking profit margins and ugly balance sheets.

“What’s the catalyst? Buckets of cheap money flooding the planet are now being put to work as euro collapse fears abate,” said a senior Hong Kong-based trader at a large Asian brokerage. 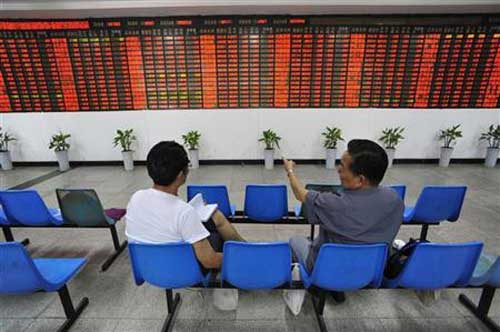 OPTIMISTIC OUTLOOK: Investors chat in front of an electronic board with stock information at a brokerage house in Xiangfan, Hubei province. — Reuters photo

Globally, exposure to technology and emerging markets was ‘dangerously high’, according to the brokerage.

Fourty-four per cent of those polled said they were overweight GEM equities compared with 20 per cent last month, the biggest month-over-month jump in the reading in 12 years.

Traders estimate last week’s US$5.4 billion of inflows into emerging market funds have brought year-to-date inflows to US$17.1 billion, more than a third of the outflow seen in all of last year and lifting regional stock indices out of a deep funk.

Chinese shares in Hong Kong, which late last year seemed to be caught in death-spiral, were up 16.2 per cent after tumbling 20 per cent in 2011.

“Market sentiment has been changing from fear to euphoria in just a month’s time, and there is a genuine risk that the market has already moved ahead of its fundamentals,” said Vincent Chan, head of China research at Credit Suisse in a note.

Chan said the market was turning a ‘blind eye’ to weak Chinese data, including land sales and power output.

The big test ahead for Asia’s 2012 equity rally would be evidence of how corporate profit margins and sales were holding up in a weak economic environment.

Investors would also be looking for signs that a recent rebound in global activity is sustainable, and not a temporary blip created by companies replenishing depleted inventories.

“Export growth is the Achilles’ heel at the moment for Asia,” said Citi Private Bank’s Woods.

“For the past two or three decades Asia has molded a growth model based on Western consumption and there is broad-based fiscal austerity underway over there at the moment,” he said.

Yet, South Korean shipmakers, Taiwanese chipmakers and Chinese industrials featured prominently in a list of Asian companies that had seen the biggest returns so far this year.

China’s Geely Automobiles was up over 70 per cent this year, despite a spate of downgrades that had seen analysts cut profit forecasts for 2012 by nearly seven per cent on average.

Loss-making Taiwanese memory-chip maker Nanya Technology, which has not posted an annual profit for the past four years, was next on he list with returns of over 68 per cent.

The second-phase of the European Central Bank’s cash injection into financial markets by way of its long-term refinancing operation (LTRO), due on February 29, would see another flood of money enter the markets.

While that could continue to underpin cyclical stocks, the best returns had likely already been made as valuations that looked attractive last year have quickly become less so.

For MSCI’s Asia-Pacific ex-Japan materials index, forward price-earnings multiples have expanded 36 per cent and currently stood at 10.2, according to Thomson Reuters.

According to Goldman Sachs’ China analysts, capital goods, shipping, and materials were among sectors that still pose earnings risks and should be avoided during results season.

“The rally in commodities is likely to fade as investors wake up to a slowdown in China,” said Adrian Mowat, chief Asia equity strategist at JPMorgan in a note, pointing to a 14 per cent dip in steel production from its peak and a 42 per cent month-over-month drop is residential housing starts in December. — Reuters