Wednesday, January 22
You are at:Home»Sports»Football»From the granstand 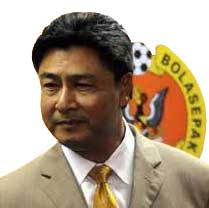 Datu Sudarsono Osman, president of FASNot many of our fans expected us to come home from Kota Bharu with a win in the FA Cup tie last Saturday. Even I had a tough time sitting at the grandstand among the Kelantan FA exco and officials in Kota Bharu.

On paper, man for man, Kelantan was the better team.

But we were quietly confident that we could spring some surprises and to create an upset. We put up a good fight and made last year’s finalist sweat their guts out for the narrow 2-1 win. We got Kelantan by their throats but failed to make the kill. It was disappointing to lose the tie in injury time. We had better opportunities to win it. I don’t blame any player for the result. There were lessons learned from this match. I hope our boys can use them to win their Super League matches.

I’ve no comments on the quality of refereeing but I’m sure fans who watched the game on TV has plenty to say. FA cup is now over for Sarawak. After 6 days on the road, the boys are tired and look forward to home. After a deserved rest day, we just have to continue working hard and be focused to do well in the Super League. For our local boys, this is their first season in Super League. They have got to learn to adapt to this level fast – a steep learning curve.

Yes, I’m happy with the way the team is progressing but the bottom line is – we need to translate it into results and points.