Friday, August 7
You are at:Home»News»Sabah»Braving dangers to capture Sabah’s beauty from air 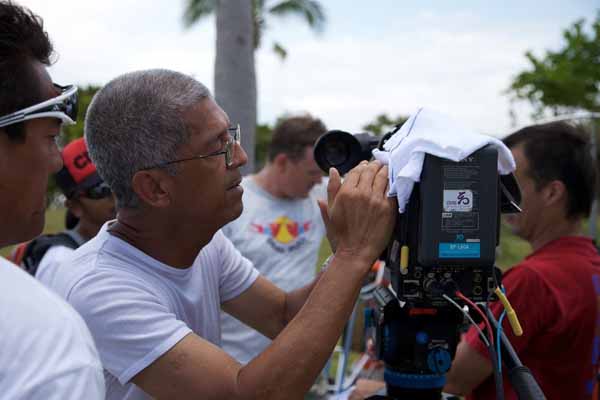 The ‘Shoot for the Sky’ documentary will take viewers to various locations, including the mangroves on Sandakan coastline, Semporna islands, the reefs and home of the sea gypsies and foothills of Mount Kinabalu.

According to its director Julian Shori, the production of the show involved huge physical and emotional challenges. 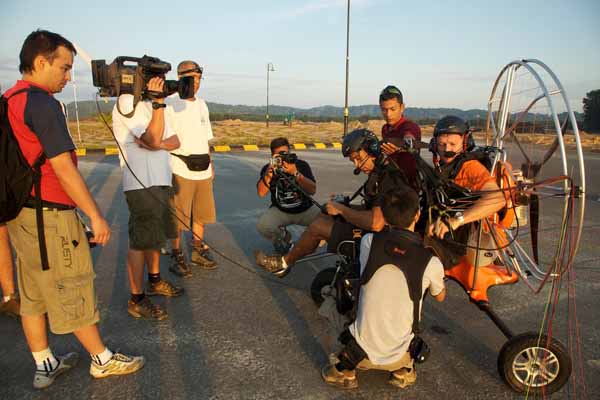 The crew starting to film Cede (right) and Jonathan on a paramotor. 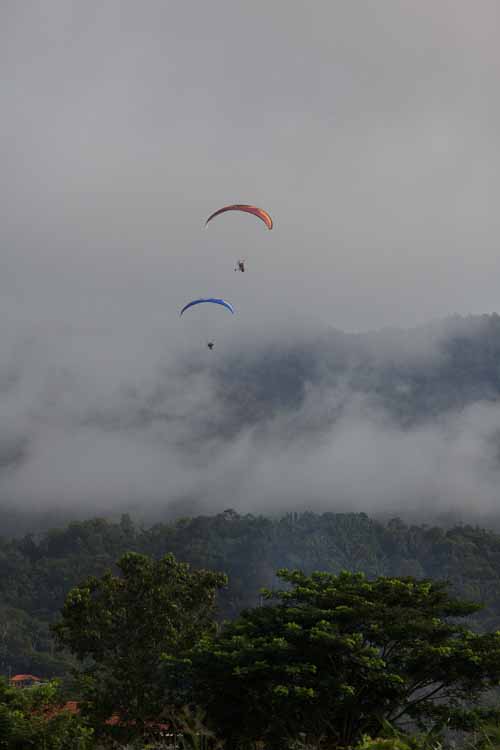 The two photographers soaring above the rainforest.

“It all started in Kuala Lumpur when we had to pack and transport over 500kg of equipment to Sandakan. We encountered many technical, logistical and weather problems.

“In the early stage, the fuel was contaminated and could not be used. So the engines had to be emptied and cleaned, then refueled.

“We also had to travel by boat each day from Semporna to the islands and had to return by late evening with the heavy equipment,” he said.

Julian said the time for taking better photographs varied from location to location.

“So it was a nightmare for me. Could they ever accomplish their mission with all these conditions and all the obstacles in our way?

“This programme was completely unscripted and therefore the talents were not directed at all in anyway. We, the crew and I, had to anticipate what would happen and be there when it did.

“It was difficult to say the least, but we succeeded in most situations,” he said, adding that “Murphy’s Law” was their guide all along, which means that if anything goes wrong, it will go wrong.”

Julian said they spent four days in Sandakan as they realised that Cede and Jonathan needed some more time training with their cameras.

They then spent three days in Semporna and two days in Kinabalu Parks.

The weather conditions posed a safety risk, with the winds frequently changing in strength and direction. .

“They were in some form of danger most of the time. We were concerned about their safety most of the time. At the Sepilok Forest Reserve, the take-off and the flight over the forest and water were quite dangerous,” said Julian.

“But most of all my concern was whether they were paying attention to James who was the safety officer as well as trainer. They were at times so absorbed with the view that they forgot to pay attention to James’ instructions,” he said.

Cede and Jonathan underwent an accelerated training course with Air Venture and it proved to be all they need to safely tackle the challenges.

“After their training week I was very pessimistic about their success, but after we started on our journey I was amazed at the determination and persistence of the two new pilots and my pessimism turned to cautious optimism,” Julian said.

“I am glad that we have managed to accomplish what we did and the two pilots accomplished their mission,” he said.

So come tomorrow, Sabahans and other viewers can follow Cede and Jonathan to enjoy spectacular sights of the Land Below the Wind, which is home to one of the world’s oldest tropical rainforests.