Wednesday, September 23
You are at:Home»News»Sarawak»‘Preserve and commercialise age-old knowledge’ 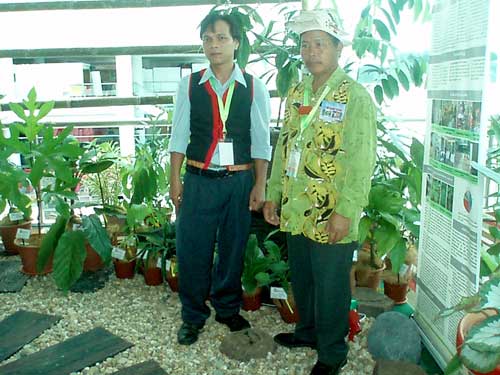 KUCHING: Communities involved in the Traditional Knowledge (TK) Documentation Project carried out by Sarawak Biodiversity Centre (SBC) hope that the project will continue to encourage the younger generations to value age-old knowledge and find ways to generate income for them.

The state, with its different indigenous groups, has a rich heritage in traditional knowledge. While many of the older folks in these various communities still retain the old knowledge, there is concern that it will be lost due to changing lifestyles and modernity.

“Through this project, we have been able to collect and document over 800 plants that are of use to our community.

“More importantly, it creates awareness to our youths on the importance of conserving these plants because they have potential to be further processed and developed into daily-use products,” said Boniface Nyosor from Kampung Kiding, a village located at Padawan, that has been involved in the TK Documentation Project since 2002.

Among the plants documented include an aromatic plant known as pahkak, which normally grows in open areas of secondary forest with the altitude height of 700-2,300 feet above sea level.

“Bidayuh community traditionally used it as a spice and to treat stomach ailments.

“Various researches have been conducted on the plant and it is found to contain high level of anti-bacterial property, which could be used to produce daily products such as soaps, shampoos and insect repellent.”

Kampung Kiding has a small scale hydro-distillation plant at the village itself to process the plant.  Besides carrying out the collection of pahkak plant parts, the community has also been trained on the method of extracting pahkak essential oil under the project.

To-date a total of over 539 kg of plant materials have been collected from Kpg Kiding and sent to SBC. The community had also distilled a total of 107ml of essential oil.

Meanwhile, Esak Tuo from the Penan settlement of Long Iman in Mulu said since the start of the project in 2002, the community had actively carried out conservation of their knowledge on useful plants and plant resources.

“Our young people also take part in the project during school holidays. It is very important that our young generations are aware of our traditional knowledge so that none will be lost.”

Long Iman was selected as one of the pilot project locations as the community had expressed keen interest to conserve their knowledge on how they depend  on the forests for resources and also because of eco-tourism potential.

It was the first community to establish a community garden and an interpretative centre under the TK Documentation Project.

He said instead of just depending on the sale of handicrafts, the Penans in Long Iman could be tour guides to provide information to tourists about the various types of plants.

“We have been involved in this project and building things up all on our own. We hope the government could provide some assistance in where we are lacking especially in terms of resources.”

SBC research officer Margarita Naming pointed out that with the potential of commercialisation, the community would see the benefits and start planting.

“In a way, that is the way to conserve the plants. The project facilitates the local indigenous communities in preserving their traditional knowledge through proper recording and also encouraging the community members to actively participate in cultivating plants for their own or commercial usage.

“We link up with the communities and come up with potential prototypes from the plants, which are provided by the communities. SBC’s role is to provide quality control and research to make data available to entrepreneurs.