Saturday, August 15
You are at:Home»News»Sarawak»Call to revamp handicraft industry 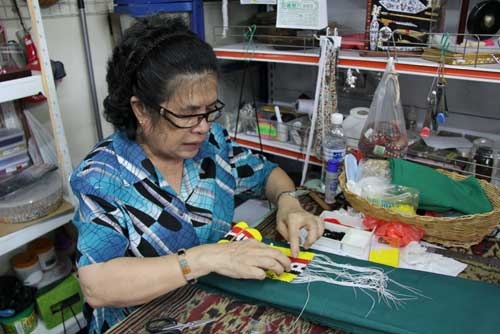 DELICATE WORK: Alice works on a customized bead sash ordered by a client. A completed bead sash can sell for several hundred ringgit depending on the materials used, its design, length and amount of labour to create it. It can also weigh a few kilo.

MIRI: Artisans and retailers face a bleak future unless the local handicraft industry can organise and modernise to meet buyers’ demands while preserving the integrity of local handicrafts.

Although the industry is currently stable, an increasing portion of Sarawak’s unique reservoir of traditional handicraft skills and knowledge is being lost forever as older artisans pass away with no one to take their place or pass their expertise to, secretary of the Miri Handicraft Centre Alice Janting told the Borneo Post Adventure Team (BAT) yesterday.

“Young people are not interested in taking up handicrafts, perhaps because they don’t feel inspired by it,¨ she said, adding that the work was very labour intensive and required much patience and focus.

A flood of cheap but poor quality imports from Indonesia compounds the problem of limited skilled labour locally.

“Unfortunately, the market is very price-driven,” said Alice, who co-owns Teng Bumicrafts No. 12 which she has operated with her husband at the Miri Handicraft Centre for the past seven years.

She explained that many buyers do not understand the amount of time and effort which goes into producing iconic Sarawakian craftwork such as the Iban’s pua kumbu and the Orang Ulu’s intricate bead necklaces.

Local artisans also tend to underprice their work, she said.

The prices demanded by the market and charged by local artisans do not commensurate with  the quality of local crafts which tend to be much better than similar imports, she pointed out.

Alice, who is a skilled beadworker, suggested that   the government could look at regulating imports of handicrafts to protect the integrity of local craftwork.

She also said that interest in traditional handcrafts should be cultivated from an early age through the education system by making it a part of school curriculum and bringing in people who know how to do different kinds of handcrafts to encourage students to learn.

Alice is also in favour of getting experts to come in to share ideas with and get feedback from local artisans on how to improve their crafts and how to sell them so that the artisans will be in a better position to compete.

She hopes that the government will help the industry  modernise so that it will be better able to compete and stand on its own feet against foreign competition.

As a Lun Bawang, Alice sees the preservation of local knowledge in traditional handcrafts as crucial in preserving the state’s ethnic cultures and heritage.

“Without our crafts, we will lose our identity,¨ she said.