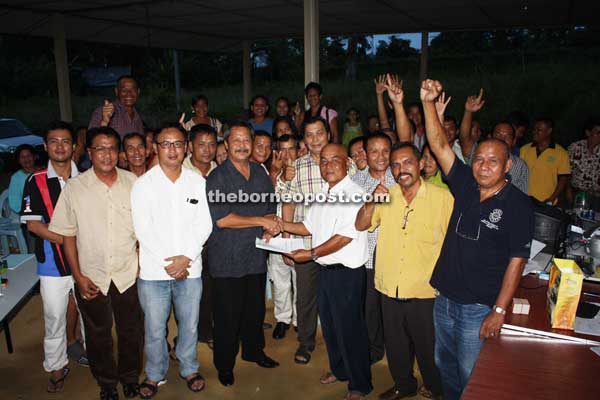 KOTA SAMARAHAN: SPDP Muara Tuang Division has described the actions of the five elected representatives sacked from the party recently as ‘piggy riding’ on the back of the Barisan Nasional (BN) for personal gains.

During its triennial general meeting (TGM) here on Sunday, its chairman Edward Brandah Madi said he believed the five were still clinging onto BN as they wanted to keep their ministerial or GLC-linked positions.

He opined that technically when they were sacked, they should be allowed to remain as mere elected representatives and confine their activities to only serving the people.

“We may be just grassroots members but we can read their movements. We can also see wolves in sheepskins. They are pretending to serve their own constituents but all along they are politicking and colluding with the people to go against the party or other BN component parties.

“We want their ministerial and GLC-linked posts be stripped from them, otherwise, they are just piggy riding on the BN.”

Brandah said he believed the majority of SPDP members were with the party, which is a “disciplined and steady party”.

He pointed out that new membership applications that kept pouring in meant SPDP remained seen as a relevant political party.

Last Friday, party president Tan Sri William Mawan Ikom said he had no qualms with the sacked elected representatives continuing to serve their respective constituents, so long as they confined themselves to serving them (constituents) only.

But their politicking, in the pretext of serving the people, would undermine BN solidarity, Mawan said.

“What we cannot tolerate is their negative politicking because it would not only undermine BN election preparations but also the party’s reconsolidation process. They should confine their activities to serving the people until nomination day. If that is the case, then we have no problem with it.”

Before their sacking for gross insubordination, the five were at loggerheads with Mawan for almost two years.

One of their resolutions was to accept former deputy chairman Alexander Asing Sadai’s resignation from the division as the latter will be moving to the northern region.

Brandah, on behalf of SPDP Muara Tuang which has over 300 members, handed over 70 membership applications to Capt Zainuddin. About 70 members, including new ones, attended the TGM last Sunday.