Monday, July 13
You are at:Home»News»Sarawak»PR’s target for Sabah, Sarawak — 18 seats 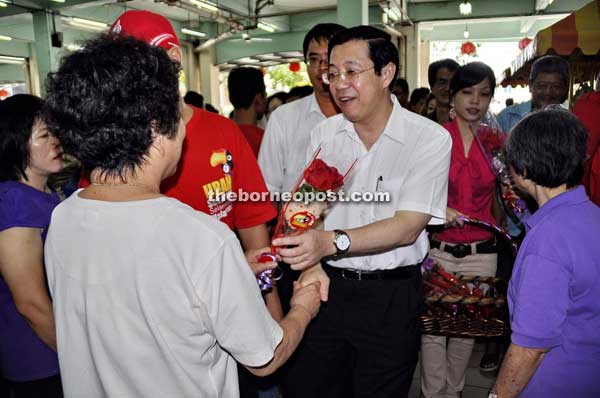 IN APPRECIATION: Lim (second right) hands out a stalk of flower to a woman to mark International Women’s Day.

SIBU: Pakatan Rakyat (PR) aims to win at least 18 of the 56 seats in Sabah and Sarawak during the 13th general election.

Penang Chief Minister Lim Guan Eng said this after giving away 3,000 stalks of flower with DAP leaders and members to mark International Women’s Day at the Central Market yesterday.

“We hope to win 12 seats in Sarawak and six seats in Sabah,” he told reporters.

State DAP chairman Wong Ho Leng said of the 12 seats, more than half would be rural seats.

Wong, who is also Sibu MP and Bukit Assek assemblyman, however did not name the seats.

He believed that the election would not be called until at least May.

“We have been going down to the rural areas in the past few months.”

Lim, meanwhile, expressed full confidence in DAP Sarawak making the much-needed breakthrough for PR to unlock the gates of Putrajaya.

On natural resources, Lim, who is also DAP secretary-general, said PR was prepared to give 20 per cent of the oil royalty to the state – a far cry from the five per cent the state is currently getting.

In Penang, he said, land premiums were renewed automatically and land owners enjoyed a 90 per cent discount.

“Penang people enjoy free Wifi facility, and Sabah and Sarawak people can also have it,” he said, reiterating that the people in Borneo should be treated as equal to fellow Malaysians in the peninsula.

He also mentioned the lack of air connectivity in Sarawak.

Previous ArticleTeam formed to investigate water contamination in Miri
Next Article Mawan: Do your homework before opening your mouth